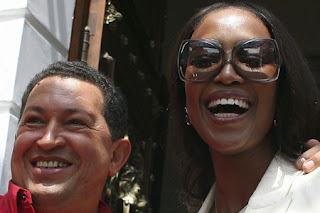 It is hard to find politivcal heroes these days, when Obama has proved such a disappointment to the American people, and Europe is held in the grip of  a corrupt bureaucratic elite.  But heroes there are, and one of them is a leader that the world’s media has attempted to portray as a demon, Venezualan Hugo Chavez.  He spends his oil revenues not on building a corrupt regime as he has been accused of doing, but on helping his people.

This is not approved of in corrupt Washington, where Chavez is seen as a threat to the status quo, and Obama is in negotiations with the Venezualan Opposition to put Chavez on the list of ‘terrorists’.  Chavez will find his way onto the CIA’s hit list and another democratic hero will be in danger of being snuffed out.  That’s how evil the American Empire has become.  Murder Inc wants Democracy dead, worldwide.

From Mike Whitney, of Global Research –