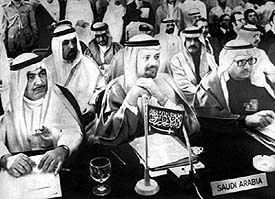 Read and watch how the Arabs were conned into handing over all their money to US Banks, and what they then did with it.

Many people ask what is the One World Government, or The New World Order?  Where are they based?  What are their names?  And especially, how did they become so powerful?  The answer to those questions encompasses decades of history, but if one moment could be found, one period in  time, where the events taking place tell the story, the video clip below is it.  It is made in 1986, and explains the 1973 Oil Crisis, how it was engineered and why, and where the huge sums of money involved, ended up.

The video is the fourth in a series of seven.  They are all worth watching.  They were sent in to me by Derek, and I have listened to them twice.  It provides the necessary background to understand more recent times, and gives a context to the 2001 takeover of the world’s military forces into a single entity, and the launch of The War On Terror.  The power accumulated in a very few pairs of hands is awesome and terrifying.  This is the story of how that power was acquired, spoken over a prison telephone onto a tape recorder, by an English banker, Jonathan May, who was hidden from sight, because he knew too much.