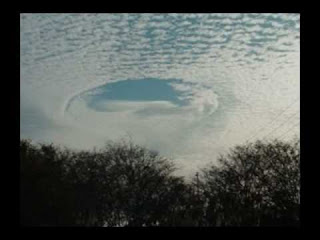 Sent in by Sue in comments.  What exactly is being shown here?  High levels of energy are being transmitted in waves, with previously unknown characteristics.  This is not nature at work, but a man-made phenomenon.  The one possibility is that HAARP is being used.  Another is that this is skilled video editing.  I am not expert enough to be sure of either explanation.

HAARP has been mentioned as a possible cause of recent mass killings of birds, the tsunami in the Indian Ocean that killed 250,000 people (northern lights were seen on the equator that day, which had never been seen before) and as a cause of the Haiti and other earthquakes.

Then there is this one showing a radar image which is not easy to explain as a weather event.  It didn’t move for a start.  Thousands of birds died where this energy effect was spotted on radar.  Very odd.

Thanks for sending these in, Sue.

From Odin’s Raven – a link showing that rain might have been summoned using HAARP intervention, not as an aggressive act but to stop the droughts afflicting the Australian interior.  They just can’t stop firing off their new toy, it seems.

3 Responses to “HAARP Caught On Video”