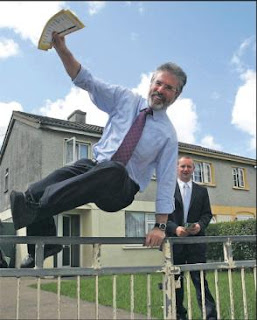 If this catches on, the world will be changed.

In an interview on RTÉ radio this Wednesday, Gerry Adams, President of Sinn Féin, invoked the principle of Glass-Steagall, and specified that he believes Allied-Irish Bank, a member of the Inter Alpha Group, should be shut down. This same aggressive stance must be adopted by patriots in the United States, if our nation is to survive.

Confessions Of An Economic Hitman.  Interview with John Perkins.


Either Ireland throws out the corporations or Ireland will be treated like Third World Countries by Economic Hitmen.  If the Hitmen fail, the Irish government would be hit by The Jackals, and finally, if they failed, be invaded by the Military.  The problem for the Hitmen, the Jackals and the US Military in Ireland is that they will have to face down a paramilitary force willing to use tactics to stop them.  Gerry Adams would be a hugely powerful influence if he did well in the coming election.  The Irish could well back a strong national leader from here.

Perkins in this interview tells how the world government works is intervening in countries around the world, Saudi Arabia, and Iraq for example.  They wanted to invade Venezuela too, but were too bogged down in the Middle East.  Perkins says corporations are more important than countries now.  Corporations are the powers today.  They fund the politicians.  The corporations are largely responsible for the world’s economic crisis.

The US Empire is overextended militarily, but is really a corporatocracy now and not a democracy, where the corporations run the show.  The world’s economy could collapse , and it could also just change.  It would be great if Ireland could push back the corporations and win. 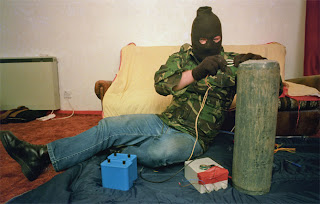 Gerry Adams has gone full circle in this game.  He used to assist in the dismantling of the British state while the OWG funded the IRA and the INLA, and had key British nationalists like Mountbatten and Airey Neave assassinated.  Thatcher was lucky to survive.

Once Britain was securely fixed inside the Maastricht Treaty, and OWG stooges like Major and Blair, were being elected, Adams was paid off and handed senior position in the government of Northern Ireland, as was Martin MacGuinness.

Now Adams finds himself on the other foot, finding that Ireland like Great Britain and the NI he detests, is just as vulnerable to its democracy being destroyed by the OWG.

He will find, as he tries to save Ireland’s sovereignty, that the big money is stacked up against him.  While he was eroding British democracy, OWG money was right behind him all the way.  Just think of it, if he knows what’s really gone on, he might one day come to regret the day he had a hand in weakening British democracy, behind which Ireland’s had once prospered.

Now we are both going down together without any prospect of a reprieve.  Or could Adams help turn the tide in Ireland, and give hope to the world, where once he helped destroy it?