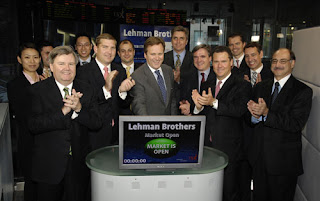 Lehman Brothers October 2007.  Bonuses and smiles all round.

Co-founder of the Tea Party, Karl Dellinger, states that, in government, he would consider the pre-emptive closure of banks like Citibank, before they get to the point of failure.  Lehmans would have been closed down before it failed, for example.  He says ‘If you’re too big to fail, you’re too big to bail out, and that means you’re dangerous, and should be closed down.’

The same fraudulent lending that brought the financial system to near collapse, and Lehmans to total collapse, in 2008 is still going on.  Assets are being overvalued, and risky loans made using money created from thin air through the fractional reserve system.  The banks are all passing stress tests, they claim, but only by valuing their exposures with rose-tinted spectacles.  The same characters that cheated the world over the last twenty years still sit ion their plush Wall St offices drawing multi-million $ bonuses.  The profits are not just fantasy, which they are.  That’s been proved by the collapse of Lehmans.  Now it’s straight theft.

Democracy needs to rear up and seize back the peoples’ money – at least, what’s left of it, and ensure that central bankers are not able to fleece the world with manipulated prices and financial chicanery of all kinds.  In the USA, it’s The Tea Party leading the Great Awakening.  In Ireland it is being lead by bloggers and speakers like Jim Corr (jimcorr.com).

In the UK, we’re behind the curve, and smitten with pessimism.  We should learn from the USA and the Tea Party, and from the anger in Ireland. Fight now, Conservative MPs.  If you don’t, you’ll lose your seats.

Once the ‘Too Big To Fails’ are in public ownership, they can be replaced with locally run banks which keep their risk profiles very low –