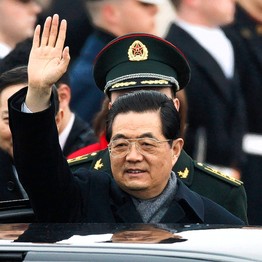 The Chinese seem to send shivers down the spines of western politicians who fear China’s growing military power, and their willingness to enter games of brinkmanship with neighbours, with Japan and Vietnam, for example.  But how realistic are those fears?  Anyone who does business with Chinese people knows that they will use all the tricks in the book in negotiations, including direct pressure, to gain some advantage.  It’s their culture to do so.  But behind the tactics often lies a lot of bluff and fear on their part that they are the ones being stitched up.  (They can also be loyal and like to build long term relationships, as Asians do).

The same goes, as regards a tendency to bluff, with their latest stealth fighter according to this report.  There’s a lot of show, and not so much content.  China could, of course, gradually catch up, but the US has an advanced war-fighting capability, and new technologies available with weapons systems that are getting further and further ahead.

But the One World Government needs someone to act in the role of the enemy, or its own existence would start to seem unnecessary.  With Russia not showing too much fight against the US, with the US, for example, rearming oil-rich, and oil pipeline-carrying Georgia with little interference (the loss of South Ossetia was possibly negotiated), and India compliant, there are very few places that are volunteering to act out the role of big bogeyman for the US to feel it needs all its military prowess.

The media has only The Taliban to scare us with, and China.  Iran is only a regional threat, and that is based entirely on fear of US invasion.  The biggest problem the One World Government faces is a lack of credible enemies.  The Australians are dutifully putting on a good show of being fearful of China as required, but in fact the OWG could easily reach a negotiated peace with China on all outstanding issues.  As we know central bankers and military industrial complexes need wars, or potential wars to keep the great game going.  Peace is simply not profitable enough.

Mao Zedong once said that “all political power comes from the barrel of a gun”. Whether his apostolic successor President Hu Jintao, visiting President Barack Obama this week in Washington, believes this particular line in Mao’s catechism is unclear. Completely clear, however, is that the People’s Liberation Army (PLA) not only believes it, but is implementing it.
……………………………………………..
http://www.ft.com/cms/s/0/f413f6fe-2316-11e0-ad0b-00144feab49a.html#ixzz1BUVmopPQ

During US defence secretary Robert Gates’ Beijing meetings last week, China tested its stealthy new J-20, a prototype combat aircraft. Many scoffed at the notion that Mr Hu seemed surprised when Mr Gates raised the test, and at the Chinese leader’s explanation that the timing was coincidental. Was the J-20 flight intended to embarrass Mr Gates and Mr Obama prior to Mr Hu’s Washington visit, or was it a signal to China’s civilian leadership about who is actually in charge? In truth, both seem likely.
Both Mr Hu and the PLA undoubtedly understand that China is dealing with the most leftwing, least national-security-oriented, least assertive American president in decades. This matters because China will be heavily influenced by its perception of US policies and capabilities. Mr Obama’s extravagant domestic spending, and the consequent ballooning of America’s national debt, has enhanced China’s position at America’s expense. Indeed, the only budget line Mr Obama has been interested in cutting, which he has done with gusto, is defence.
Sensing growing weakness, therefore, it would be surprising if China did not continue its assertive economic, political and military policies. Thus, we can expect more discrimination against foreign investors and businesses in China, as both the US and European Union chambers of commerce there have recently complained. Further expansive, unjustifiable territorial claims in adjacent east Asian waters are also likely. While the Pentagon is clipping coupons and limiting its nuclear capabilities in treaties with Russia, the PLA is celebrating Mardi Gras.
Consider two further important issues: Taiwan and North Korea. When Beijing threatened Taipei in 1996 President Bill Clinton sent two carrier battle groups to the Taiwan strait, demonstrating America’s commitment to Taiwan’s defence. Does anyone, particularly in Beijing, believe Mr Obama would do anything nearly as muscular faced with comparable belligerence today? On the North Korean menace, meanwhile, Mr Obama is conforming to a 20-year pattern of US deference to China which has enabled a bellicose, nuclear Pyongyang.
Of course, if China sensed an America determined to maintain its dominant position in the western Pacific, and ready to match its determination with budget resources, it might be dissuaded from its recent objectionable behaviour. In such circumstances, more balanced, co-operative and ultimately more productive relations would likely follow. On the other hand, if China is determined to increase its military strength regardless of Washington’s posture, all the more reason for America to ready itself now.


It’s a cute idea that America might not have readied herself for this challenge, and be good and ready to devastate China with an array of weaponry designed for the purpose.  What a tragedy it would be for these militarists if peace were to break out, and none of their expensive toys would ever be needed.  They’d all be out of a job.  Just Dreadful.
The Tap Blog is a collective of like-minded researchers and writers who’ve joined forces to distribute information and voice opinions avoided by the world’s media.