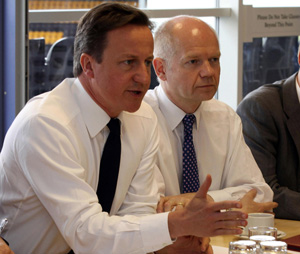 The Hague strategy of linking up with the Lib Dems certainly had its attractions.  Taking out the third party and making it into an ally rather than an opponent sounded like the perfect strategy – in theory.  Events have conspired to favour the Hague strategy by making the electoral arithmetic exactly right for it to happen.  There was literally no other possibility for the Hung Parliament that the election created.


So much for the theory.  The Wedding of the two young partners to the new relationship was a joyous occasion, with all celebrating the end of the New labour tyranny.   The young couple, Cameron and Clegg, seemed to have a definite personal chemistry, and jokes went round of the Brokeback Coalition.


But political parties are not merely the individual leaders.  They are complex entities that have existed in darkened corners of the political landscape for decades on end.  Only exposure to power reveals their true nature, and the promises carefully calibrated to win votes, get put to the test.


The Lib Dems are a debating society, where almost anything can be proposed, and accepted, if it wins more support.  The process has proved absolutely hopeless once exposed to the reality of power.  The reputations of the leaders are in tatters.


Cameron held his party together by making a series of promises to the eurosceptics who are the majority of his supporters, that he would make major efforts to repatriate powers from the EU.  Winning the election has revealed how entirely false these claims were.


His own MPs have to weigh up the situation.   Being new, most were first loyal to the leader who brought them to Westminster, and they have tried to be go along with the Coalition with the Lib Dems.  But Cameron’s authoritarain ways have continually angered them, and the bullying of the Whips.


Another factor that is weighing heavily with them, however, is the fact that the Coalition is not proving as successful a tactic as Hague hoped it would be.  Support for the Lib Dems has collapsed by two thirds, and the majority of those has gone to Labour.  The Conservatives are left with a unified opposition, when before they had one divided.


That’s not all.  Conservative voters in the country are also weighing into the calculations of Conservative MPs.  They know from talking to Constituents that as many as 20% of their voters will not support the Party if it’s within an electoral alliance with the Lib Dems.  Many of those voters will be going to a party that has been growing quietly from very small beginnings fifteen or so years ago to become a potential threat to Conservatives – UKIP.


So not only has the Hague strategy unified the Left behind Miliband, it could now be about to achieve the almost incredible – a double whammy of disadvantage,  also dividing the right at the same time.


The byelection at Oldham will give some indication of the trends.  Labour are showing well in the Polls, which are never that trustworthy, and a low turnout might also give a distorted picture.  But a good showing by UKIP combined with a poor Conservative one would only lend strength to the Conservative backbench tendency to revolt.


The vote on the European Union Bill will take place first, and many eurosceptics will be watching to see how effective the backbench rebellion is in stopping the Bill.  If Labour come in behind them, the government could suffer a serious defeat.


Conservative MPs could soon be facing a situation where Cameron’s luck has run out.  His Lib Dem strategy could be in tatters, unless they pull of a surprise win at Oldham.   Labour could be looking at a solid 45% which would be unassailable even with an electoral pact for the Coalition.


There would only be one other course available, which would be to abandon the coalition, remove Cameron and replace him with a eurosceptic Conservative leader, who could pull together the support of a eurosceptic nation, desperate to get control back from a governing elite which is running ramshod over everyone’s efforts to better themselves, bringing the country’s economy to the brink of collapse, and allowing unaccountable judges to exercise the sovereignty that once belonged to Parliament.  It is not surprising to find that a government which is doing nothing to solve the crisis has already run out of rope.  Cameron could be gone sooner than people think.


Telegraph – New polling suggests that 20 per cent of Tory voters would desert Cameron if he fought alongside the Lib Dems.


Conservatives might as well fight a risky battle which they could win, than continue on the Hague path of certain failure.


Writing in the Mail on Sunday, Conservative MP Bernard Jenkin argued that, “It will do nothing of the sort. Parliamentary supremacy, or sovereignty, or primacy doesn’t feature in it. As currently drafted, it is so feeble it would effectively hand over control of parliamentary sovereignty to unelected judges.” He concluded, “This would be a legal document, enforceable by the courts, destroying parliamentary sovereignty and replacing it with rule by judges.”

6 Responses to “Cameron’s Time Could Soon Be Over”