Why are the Police throwing a legitimate candidate out of the hustings in Oldham?  Has he committed a crime?  Apparently not.  He is evicted because the State doesn’t like his Party standing for election.  That party is the only party that wants Britain to quit fighting wars on behalf of the One World Government in the so-called War On Terror, and bring the troops home permanently. 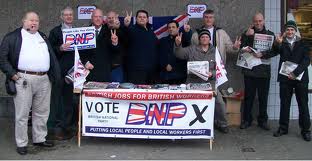 BNP Oldham.  They have some good policies, and some rather odd ones.  What right has the Police to silence these folk?

That Party is the BNP, not my favourite, but they have every right to be heard.

The Police have no right to interfere in the democratic process.