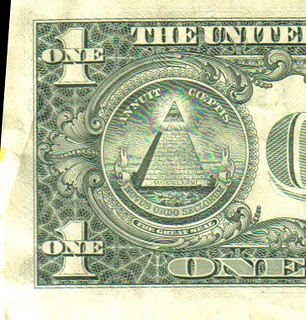 The US Dollar Bill.  Novus Ordo Seclorum.  It’s in everyone’s pockets.
It means – New World Order.  So much for the ‘pursuit of happiness’

Peter Sissons wrote an interesting article detailing the left wing bias of the BBC, published by The Daily Mail, today.   His list is interesting, but his diagnosis is not quite right.  Is it for example left wing to be against religion?  I wouldn’t think so, necessarily.  Many combine left wing views with belief in God.

In the article, Sissons claims that the BBC opposes all religions (see full quote lower down). But as Moslems fight back when criticised, the BBC focuses its attacks on Christians who turn the other cheek. That is not left wing, to be against religion, but Fabian, the branch of left wingery which sees socialism as the ideal way to subjugate the masses, so the elite can control them, as the elite has superior intelligence.
The Fabians, for example, were keen for the 1st World War to get going so the established old order could be overthrown, and a ‘new world order’ be achieved, with supranational government taking over the nations, pretty much what we have now.
The New World Order, unlike left wing beliefs, is against all religions, and the NWO cap, not the left wing label, fits the BBC’s output much better.  Karl Marx was a Satanist, and the NWO and Fabianism of the Webbs at the London School Of Economics was said to be based on REASON. 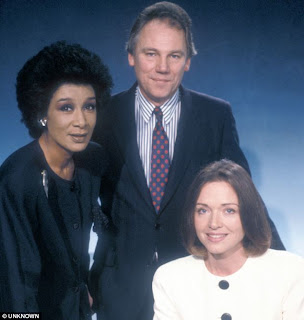 Moira Stuart, Peter Sissons,  Anna Ford (rt)
BBC’s news reading team in the 1990s.  No happiness allowed.  Just clinical reason with a hint of a smile occasionally.  Ever wondered why watching the news is so depressing.
Today we are ruled by REASON, where a hundred years ago, the world was ruled by GOD.  When will we be ruled by CONTENTMENT, where human happiness is valued?  The American Constitution was a step in the right direction, with the pursuit of happiness described as the right of all men.  That is a far more left wing and revolutionary notion than the ones propagated by the BBC and the Fabians.   Today the notion of a right to human happiness is being brutally suppressed in the USA, by the same elitist power networks that have enslaved Europe.

Our gaoler is REASON, by which an elite justifies its power over the masses because of its superior intelligence.  The Fabianism of The New World Order is the exact opposite of what most people imagine left wing notions to be.  I think Mr Sissons could agree with that.

I left this comment on Political Betting on the discussion thread which was talking about Sissons’s article.  The comment was deleted by the comments monitor.
http://www.dailymail.co.uk/news/article-1349506/Left-wing-bias-Its-written-BBCs-DNA-says-Peter-Sissons.html
8. Peter Sissons on left wing BBC bias – Islam must not be offended at any price, although ­Christians are fair game because they do nothing about it if they are offended.
Why is it left wing to be against religions?
In fact it is not, although left wing regimes often try to crush religion. Being against religion is though typical of the Fabians, who are an element of the OWG. Blair was the head of the British Fabian Society. How come he does this religious act all the time? PR, probably. He is uniformly OWG in everything he does, as is Brown.

His conversion to Catholicism coincided with The Vatican’s takeover by a paedophiliac Pope who justifies paedophilia as a ‘normal act’. Paedophilia is another emblem of the OWG, besides godlessness and war-making.  The Pope stated in his Christmas message that there is nothing in the world, exclusively good or exclusively bad.  The Vatican has been taken over by the dictates of the Fabians and the school of REASON.  GOD has left The Vatican.

by Tapestry January 22nd, 2011 at 08:41
One problem with REASON is that it can justify anything you want it to.  Another is that it devalues belief in anything at all.  Socrates demonstrated that all human beliefs were logically false.  Our conscious minds are only 2% of our total mental capacity.  Our emotional and instinctive capabilities, by far the greater part of our being, are made inadmissible, if all values have to be derived from REASON alone.  REASON and logic legislate everything ‘in’ or ‘out’, but cannot weigh, or sense.   They cannot permit change, and they demand total uniformity.
The capacity of humanity to be CONTENT and not make war over whatever ‘reason’ dictates, is not even on the agenda.  REASON, imagining itself a superior form of being, is in fact barbaric, denying all human feeling, which is why we see a remote unemotional depressing representation of the world every day on the BBC.  Humanity and our happiness are inadmissible.
The world would work a lot better if the right to the pursuit of happiness was admissible, as I discovered when working on business organisational culture at Henley Management College in the 1990s.  Contentment is crucial for the effectiveness and motivation of people in business.  It is equally crucial in delivering a good social outcome.  Human Contentment is a much broader concept than  REASON, which promotes the narrow mechanistic over the infinite sensing side of humanity.
An emphasis on a right to the pursuit of happiness, as realised by the Founding Fathers of the USA, brings better results than a reliance on reason, and the violence it always requires to enforce its clinical classifications.  The USA is where the coming cultural set piece battle is shaping, where The  Tea Party, determined to revive a culture based on human-centric values, seeks to sweep away the clinical and corrupt violence of the NWO.  Britain is still asleep, a once happy people, now walking in a watery soup of deep BBC-induced depression.
FINALLY –
Here is a good video showing how far the ‘socialist’ network has gone in shaping the world since the REASON of The New World Order decided to overthrow The Old World Order and start the First World War.  To fill in on the story of how The New World Order started, you need to follow the links in the left column at the top of my blog, Tapestry’s Politics, and find ‘The Brotherhood Of Darkness’.  As this is the programme that has taken over our world, we might as well at least try to understand it, before we are finally consumed by it.  Maybe, if people understood what they were seeing and hearing more clearly, they would start to reverse the unstoppable progress of this political construction, which began 100 years ago, and is now ruling every word that we hear from the media, the BBC its greatest UK asset.

The video from Brasscheck TV.  The story was also run by The Guardian.
The Tap Blog is a collective of like-minded researchers and writers who’ve joined forces to distribute information and voice opinions avoided by the world’s media.

13 Responses to “BBC Is Not Left Wing, But New World Order”