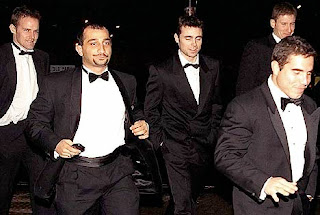 Bonuses all round, for now.
This comment was left on Polititicalbetting suggesting that bank regulation was not responsible for the credit crisis –
330c – Wasn’t there that policy report by John Redwood released in August 2007 saying that the financial institutions were being strangled in regulation and needed to be ‘freed’ of all the burden because they were responsible enough to completely self regulate.
Oh – anyone remember what happened just a month later. I guess when you are so very wrong it is good to have it proved so decisively, so quickly.
Tory central office did a rather successful job at completely airbrushing any trace of this document from the records.

338. It was financial regulation which instructed banks to lend to people who didn’t meet traditional bank lending criteria = e.g ninja loans – no income, no job, no assets, and which instructed them to repackage the loans and sell the risk on to other financial institutions. The Basel 2 banking rules no less.

Basel is where the Bank Of International Settlements is located, the central bankers’ central bank, which like nearly all the central banks, is itself a private business, of which the IMF and the World Bank are ’subsidiaries’, or fronts.
It was the very few who control the world’s banking fraternity who decided to let loose the property boom, which has placed all the world’s banks in such a precarious position. John Redwood knows better than to criticise the incredibly powerful central bankers of the world, but he can see when banking regulation has gone mad. NO bank would have ever lent to such poor risks except when they were given no choice by regulators.

344.  Why did the central bankers engineer the property bubble worldwide?  They make money by manufacturing bubbles, getting people into debt which they can’t pay back, and then dictating the terms of the bail-outs.  They also make huge profits from crashes, which they engineer from time to time.  The bail-outs stop.  Prices tumble and they buy up everything for bargain basement prices.  Then when they’ve scooped up ownership of all the resources of the world, they then refinance the economies and prices recover.

1929 was a textbook operation, but nothing like the event being set up at the moment, with share prices being pumped with quantitative easing, before they are crashed when the QE is switched off, possibly in 2012. The bail-outs could suddenly stop, as, by then, new banking rules will permit senior bondholders of banks not to be paid.  Then the soup kitchens will be opening all over the world –

Great depressions are another way bankers make the really big money.  First they flood the world with loans and get everyone into debt bidding up crazy prices.  Then they get prices to crash before they clean up buying everything at bargain basement prices.  It’s as simple as A,B,C.  Just watch.

I found this video on Jim Corr’s blog.  It’s very good.  I’m not sure I agree with all its historical explanations, but as regards the relationship between banking and politics, it’s spot on.  It shows how the power of money is greater than the power of words.  Once the US had given away the right to print money into private hands, namely the Rothschilds, who were behind the Fed, the country’s politicians were no longer in control.  Every President who tried to stand up against the power of the bankers was either assassinated or was lucky to survive assassination attempts.  It’s a good way to pass twenty minutes absorbing this stuff, and it helps to explain how the American government and other governments have lost control of their economies.  And it suggests that, if you’re considering taking out a loan, it might be better to wait.