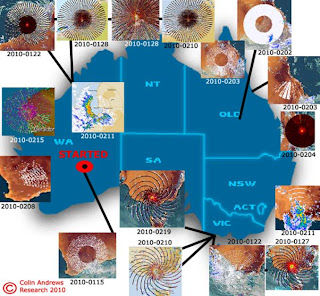 Bizarre Weather Patterns Recorded By Radar Over Australia In 2010

People are interested in why the Queensland floods are happening.  Here are my thoughts.
Queensland is only the latest target for biblical weather patterns in Australia, which are devastating the economy and environment.
The reason might be this.
The USA has developed HAARP technology which can create and direct extreme weather with incredible precision.  Electricity is fed up to the ionosphere which becomes heavily charged.  This charge can then be directed to descend to earth at any point in the globe, by chanelling it down by means of magnetic waves.  The effect is to create earthquakes where there are fault lines available to disturb, as in Japan, or huge storms where clouds can be created from the oceans, and moved to a target on land where they can then be made to drop their load.
Rather than confusing people with more details about this, if you are interested, search the internet to research HAARP technology, based on discoveries made by Nicola Tesla 100 years ago.  Check the videos below which describe one journalist’s encounter with the technology.  If it sounds a bit ‘mad scientist’, keep reading and watching the various explanations of how weather, and other things might have been manipulated in the past –


Then the question is whether and why is Australia being targeted with the technology?
The answer might be that China is threatening the USA with new stealth airplanes, submarines and anti-ship missiles which they claim would be capable of sinking USA aircraft carriers if there were to be a confrontation over Korea or Taiwan.  The USA wants to demonstrate the power and effectiveness of its HAARP technology to act as a dicincentive to China to become overly aggressive with conventional weapons. The Star Wars satellites sent into space to cover the globe over the last twenty years are the delivery vehicle for controlling the descent of the energy to its target.  At this point it is assumed the Chinese don’t yet have the capability to eliminate the satellites, although  one aspect of HAARP is that it can shoot down all missiles and airplanes at will, or rather they are unable to penetrate the energy waves it creates.  So the satellites are believed to be impregnible.
The reason Australia is angering the One World Government which has effective control of America’s military capabilities, is that Australia is permitting China to have access to all her minerals, including coal and fuels.  The Australian government is under intense pressure to stop doing this, and attempts are being made at government level to create disincentives to corporations to sell out the resources to the Chinese.  The HAARP is being used as a method of threatening the Australian government, and bringing Australia to heel.  It is also a demonstration to China of what could be done to China if they persist in using miitary threat to push American influence back from Chinese spheres of aspiration.
How else can anyone explain what is happening?
Another possibility is that China also has developed HAARP technology, and Australia has served as suitable play area for both superpowers to demonstrate their capabilities to each other.  Though why would China want to cripple the mining output of Queensland on which she depends?


The apparatus for HAARP is a reversal of a radio telescope; antenna send out signals instead of receiving. HAARP is the test run for a super-powerful radiowave-beaming technology that lifts areas of the ionosphere by focusing a beam and heating those areas. Electromagnetic waves then bounce back onto earth and penetrate everything.


Brasil is also having an area previously in drought now suffering huge flooding, killing hundreds, at the same moment as Brisbane.  Derek mentioned this in comments.  Is someone messing around with the weather?  Richard North says it is nothing to do with warming.  The warmists’ agenda desperately needs some weather events to give their campaign for world carbon taxation a kick start.


William Hague is the first Foreign Secretary to visit Australia for sixteen years.   He will be talking about international security, taxation and climate change.  It will be interesting to see if there is any change in Australia’s selling out her reserves to China.  Nathaniel Rothschild is building a worldwide coal empire, flying around the globe to see his coal mine purchases.  Now that wouldn’t be a coincidence, would it?  Is the OWG targeting Australia’s coal reserves, and using HAARP as one of the ways to persuade a change of heart.


UPDATE May 11th 2011 – similar attacks on the USA show that weather attacks are more likely being used to promote notions of global warming, and the introduction of environmental measures that appeal to corporations and governments.  See Square Clouds link below.
An interesting angle on the Brisbane floods, being about ‘global warming’, NOT.

weather being used as a weapon – Daily Express


Square Clouds and HAARP Rings Precede Tornado
The Tap Blog is a collective of like-minded researchers and writers who’ve joined forces to distribute information and voice opinions avoided by the world’s media.

15 Responses to “Australia Being Targeted. Why?”