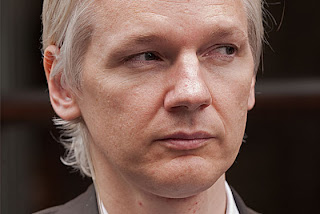 People are a bit confused about Wikileaks.  Why is so much media attention being sucked onto Julian Assange?  Is he the only human being on the planet able to challenge the power of the One World Exploitation System?  Unlikely.

This explanations seems to hold more water.
Are we not dealing with a case of “manufactured dissent”, whereby the process of supporting and rewarding Wikileaks for its endeavors, becomes a means of controlling and manipulating the Wikileaks project, while at the same time embedding it into the mainstream media.
It is also worth mentioning another important link. Julian Assange’s lawyer Mark Stephens of Finers Stephens Innocent (FSI), a major London elite law firm, happens to be the legal adviser to the Rothschild Waddesdon Trust. While this in itself doesn’t prove anything, it should nonetheless be examined in the broader context of Wikileaks’ social and corporate entourage: the NYT, the CFR, The Economist, Time Magazine, Forbes, Finers Stephens Innocent (FSI), etc.
Manufacturing Dissent
Wikileaks has the essential features of a process of “manufactured dissent”. It seeks to expose government lies. It has released important information on US war crimes. But once the project becomes embedded in the mould of mainstream journalism, it is used as an instrument of media disinformation:

“It is in the interest of the corporate elites to accept dissent and protest as a feature of the system inasmuch as they do not threaten the established social order. The purpose is not to repress dissent, but, on the contrary, to shape and mould the protest movement, to set the outer limits of dissent. To maintain their legitimacy, the economic elites favor limited and controlled forms of opposition…  To be effective, however, the process of “manufacturing dissent” must be carefully regulated and monitored by those who are the object of the protest movement ” (See Michel Chossudovsky,  “Manufacturing Dissent”: the Anti-globalization Movement is Funded by the Corporate Elites, September 2010)

What this examination of the Wikileaks project also suggests is that the mechanics of New World Order propaganda, particularly with regard to its military agenda, has become increasingly sophisticated.
It no longer relies on the outright suppression of the facts regarding US-NATO war crimes. Nor does it require that the reputation of government officials at the highest levels, including the Secretary of State, be protected. New World Order politicians are in a sense “disposable”. They can be replaced. What must be protected and sustained are the interests of the economic elites, which control the political apparatus from behind the scenes.


hattip – Jim Corr
The Tap Blog is a collective of like-minded researchers and writers who’ve joined forces to distribute information and voice opinions avoided by the world’s media.