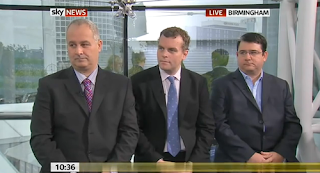 L to R.  Iain Dale.  Tim Montgomerie of conservativehome, and Paul Staines of order-order.com all being interviewed together by SKY NEWS during the Conservative autumn conference.

As Iain Dale heads for his radio, publishing and media career, giving up his blog, my first thought would be to wish him good luck.  The thought however does occur that top bloggers such as Iain are being targeted to be sucked into the mainstream media, which is attractive to them as a way to further their careers.  In his resignation blog post, Iain mentioned that there is a conflict of interest for him, in that his blogging-self wants to spill the beans to his readers, who were as if his personal confidantes, while his media career would often require him to tread more carefully.

Paul Staines aka Guido Fawkes seems as he is still committed to blogging, but he too is being dragged into soft media appearances such as on Any Questions, being broadcast as I write this post at Saturday lunchtime.  He claims to be motivated by anger, but the satisfaction of getting attention on the MSM  must appeal, and he often talks about his need to make money.

The MSM would like nothing better than to draw in the bloggers and reduce their attacks and revelations.  Getting the bloggers into the ‘inside’ system with all its appeal and financial allure will be a good way to achieve that.

Tim Montgomerie of Conservativehome seems to be more concerned with his political convictions than fame or fortune.  Nothing much changes whether he is given media exposure or he isn’t.  All three of them have done much to open up political discussion and involve many more people in politics.  Yet none of them seems able to look beyond the goldfish bowl to where power is really being exercised, as yet.  When will they start focusing on the puppeteers rather than the puppets?  Hopefully before they too become any more like items of puppetry theselves, as with THIS.

4 Responses to “Top Bloggers Are Being Sucked Into The System”