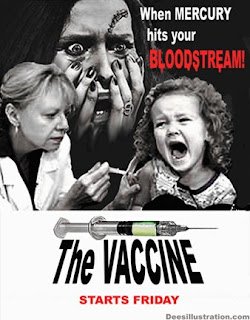 Not only that.  4 million Britons have had the vaccine, and a very large percentage of them have become ill as a result, including both of my neighbours.  The vaccine is preserved by a compound of mercury, the most toxic of all the metals.  Why is the government permitting the pumping of large quantities of mercury into human beings, who are bound to be made ill as a result?

Not only that.  4 million Britons have had the vaccine, and a very large percentage of them have become ill as a result, including both of my neighbours.  The vaccine is preserved by a compound of mercury, the most toxic of all the metals.  Why is the government permitting the pumping of large quantities of mercury into human beings, who are bound to be made ill as a result?

That is the next question.

The answer could well be almost impossible to believe.  Vaccines are being used as a way to cut the population of the world, according to Bill Gates and others.  The swine flu so-called pandemic is just one example of that programme being put into effect.

The UK Department of Health mantra relates that there are approximately  12,000 deaths from
influenza every year.   In the United States, flu deaths are reported from a low of about 3,300 deaths
to a high of 49,000 per year. Very few deaths are ever proven to have been caused by flu alone.


What we write today is in no way intended to minimise the loss of life tragedy through flu, but
simply an attempt to put the media reports into context. More old people have died from
hyperthermia in recent winters than the flu  – probably due to impossibly high heating bills. It is a
great shame that there is not more focus on this rather than flu deaths.


As Dr Tom Lakering writes in The Aspen Times : “A systematic review of 51 studies involving 260,000
children age 6 to 23 months found no evidence that the flu vaccine is any more effective than a
placebo in that group. A JAMA study showed the incidence of clinical influenza in the vaccinated
group was 2 percent but in the un-vaccinated group it was only 3 percent. This means that out of 100
people, one person was attributed with avoiding the flu because of the vaccine.”


Pharmaceutical Industry Propaganda
During the flu season last year, the then UK  Chief Medical Officer Liam Donaldson fed the
mainstream media the story of 65,000 deaths scheduled to occur from Swine Flu. Ably promoted by
the pharmaceutical industry, vaccine branch in particular, panic ensued as the media irresponsibly
flooded their front pages with every single Swine Flu case that occurred, courtesy of the sinister UK
government lobby groups, Sense About Science and The Science Media Centre both funded by
Pharma.


As we all know, Donaldson’s predictions were UK Health Department sensationalist crap.
From those Vaccine/Tamiflu centres whose staff included previously unemployed teenagers armed
with cue cards, to the incredible financial loss endured by the British economy as the government
overreacted to a Swine Flu ‘Pandemic’ that never materialised, the UK government and the media
conjoined to hit new heights in fear marketing.


SENT IN BY READER –

Hi Tap,
I am preparing a reply to the Swine Flu Vaccine etc items.  It will be entitled Post Ergo Propter Hoc – a classic fault of logic.  I’m sure your classical education will enable you to correct my almost non-existent Greek, if necessary.
Pharmabob


Pharmabob is not into conspiracy so his reply will be interesting.  Post Ergo Propter Hoc means ‘After this in time therefore because of this’.  The Latin is much crisper.
The Tap Blog is a collective of like-minded researchers and writers who’ve joined forces to distribute information and voice opinions avoided by the world’s media.