Rebellion from the backbenches against Cameron isn’t far away.  The government’s weakest link is not the Cameron/Clegg axis which by all accounts is going well.  It’s Cameron’s relationship with his own backbenchers.  The 1922 Committee meeting yesterday was explosive by all accounts, to the point of threatening Cameron.

Recent voting in the Chamber has shown 37 MPs voting against the government over the EU, with more than that number abstaining.  There are enough rebels to launch a leadership challenge against Cameron.  The motivation is there.  All it would take would be a turn of events which triggers the action, a spark.

Maybe Jeremy Cunt could provide one.  The BBC obviously sees him as a threat, for some reason.

Although, more likely, the necessary events will be provided by the eurozone.  The US is pumping tax cuts and QE out into the financial system, trying to delay the financial crisis, buying time for the EU to put its house in order.  But Germany doesn’t want to be lumbered with carrying the rest of the continent in perpetuity. There is simply too much to carry.  Mrs Thatcher’s tactic of talking the EU into rapid expansion might have done just enough to sink the project.

Conservative backbench MPs will be ready to move if the cracks start appearing.  If the Euro goes, so does half the EU.  So probably do Cameron and Hague.  No wonder they are such good Europeans.

There is another alternative.
UKIP is surging.  They’ve shot from 3% at the election to 5% now.  See YouGov.

If UKIP surges on to around 7%,  Conservative eurosceptics should abandon Cameron and Hague and amalgamate with UKIP to form the UKCP.  The EUCP/Lib Dem Coalition would be finished, and UKCP the largest party within twelve months.

Conservative MPs did not want to vote for a referendum on the Alternative Vote, a system they dislike. Many did not want a reduction in the number of MPs and the boundary changes that entails so soon after winning their seats for the first time. They did not want to support the increased External Action Service of the EU or the expanded EU budget. They did not like the 5 year Parliament  bill, the increase in the EU and Overseas Aid budgets nor some of the defence cuts.

This week is the week when many of the new MPs on the Conservative side have decided they want change in the way they are treated and in the balance of policies put forward by the government. I think they will give the government its HE Bill, but they are also putting down markers about the problems that worry them.
These three developments certainly make Parliament interesting again.
If they don’t get concessions from Hague and Cameron, something will have to give.  Hague is injured material these days, and is not going to be such a big figure as he was, moving ahead. 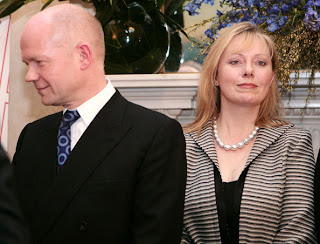 16 Responses to “Rebellion Brewing Against Cameron And Hague”