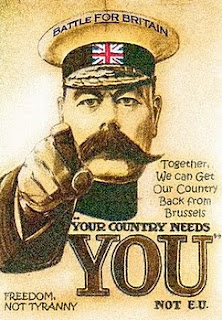 What will they have to do to break our spirit?  That is the big question in the minds of the One World Government that wishes somehow to break the spirit of the British people.  If they use terror tactics, like the London tube bombing, we stand together and keep calm.  If they rig our elections and keep unpopular regimes in place carrying out policies no one agrees with, such as selling our gold for a song, and the taking on of massive government debts, or the the wars in Iraq and Afghanistan, people merely wait for the moment we can be rid of such wrong-headed governments.  Otherwise life goes on as before.  So far.

Europe is the key to achieving world domination.  The USA and the Americas are already locked into a serious economic decline which is breaking down resistance, and programmes like Homeland Security are already in place to incarcerate millions of Americans.  The locking together of the myriad independent democracies of Europe is the next part of the plan,into a superstate which operates beyond the reach of  democracy, where the same measures for oppressing the peoples can be implemented here as in the USA.  But the independent-minded nations like Britain and Ireland won’t lie down.

Next up comes a plan to gradually break our spirits by degrading the quality of our lives, so that we throw ourselves upon the government demanding our own subjugation by state power.  Prisoners and criminals are being released into the community, with obvious consequences to follow.  The British navy is obliterated in a single Defence Review.  Peoples’ children are being removed by the thousand for no good reason other than that the state wants them removed, to improve social mobility, according to Michael Portillo.

”Students” – how often do we see such a title used to cover up for political activism throughout history – are coaxed on the streets with it being made quite obvious that ”demolition” is the plan, while the Police are instructed to carry out barely sufficient containment policies while buildings and national monuments are smashed, daubed or burned.  BBC announcers all start making slips of the tongue, showing no respect to our political leaders.

Into the mayhem, the Prince Of Wales offers himself to give the rioters a coup, by ensuring his car is vandalised in public.  What is going on?

The plans to push the world into One World Government have been in place a long time.  Some see them as German in origin, the Madrid meetings in the war by Germans who could see that Hitler would lose, planning the next attempt to enslave the world (Journalist Christopher Story who died this year).

Others (like another journalist, Joan Veon who also died this year) see central bankers, like the Rothschilds, the Rockefellers and Prince Charles backed by the CIA and the world’s intelligence services as forming a network across the globe to dumb down educational standards, create a sport/soap opera dependent populus with no interest in politics, to be easily subjugated through psychological operations.

Military conquest of the world is off the agenda.  It is the psychological that is now seen as the battleground whereby vast populations can be made to bend via the media to the new powers that would rule the world.  Charles sees such moves as essential for the furtherance of his environmental beliefs.  The population is too big and needs reducing, is one of his key tenets.  That will only be achievable if democracy is suppressed and a totalitarian power is able to bring about millions of deaths and sterilisations – chemical or otherwise.  ho would doubt that agencies capable of inflicting 911 on America would not be capable of murdering many more innocent citizens to their purposes?

But before they can place us all into a state whereby they can exercise totalitarian power over us, they must first break our spirit.  The financial crisis has been deliberately engineered to create mass insolvency, and will be further engineered so that most people will lose their wealth, while insiders will be able to hugely gain by buying at the bottom, as happened in The Depression.  Sovereign nations are being enslaved with vast debts which they cannot  possibly repay through the engineered banking crisis.  Our political leaders are corrupted with huge payoffs for cooperating.  Blair is a fine example.

We will see more and more attempts to break down our spirit as they move to subjugate Britain into their plans.  Throughout history the totally powerful have always sought to detain and murder large numbers of people.  The One World Government will be no different to Stalin, Hitler and Mao.  The only difference is that their names will be kept hidden while the masses are exterminated, and they are convinced that they are saving the planet by doing so.  What fun it must be to exercise total power over the human race.

For sources and more evidence of what I write, look around the blog.  And keep your mind strong.  They will only succeed if they can break your will.  Some are doing their best to fight back.  This guy is a hero of our time……hear this commentary which contains not a little wisdom.  The next Wikileaks revelations are coming in January 2011, and will expose the Bank Of America, as illegally evicting people from their homes in the USA.  The consequences could be severe on the financial system, and the strength of the OWG.  That’s what’s making them edgy right now.  They are used to being the ones that call the tune.  Perhaps they are sensing  a loss of control and are upping the anti.  Watch out for more inexplicable stupidity – as they attempt to drag us down to their level, and break our will to resist.  The battle is for your mind.  Win it, if possible, without getting all worked up to the point of violence.  That’s playing into their hands.  Use the internet and all forms of social networking to build peoples’ and your own understanding of the threats we face.  Switch off TV and radio.  They are the enemy’s primary weapons.

In the below clip, an American describes the psychological subjugation of North America, and how the OWG intends to control the rest of the world.  It has been seen by over 2 million people.  The final gameplan, described by Aaron Russo, a former friend of the Rockefellers, is to insert a chip under the skin of every human being, which will contain all their financial information, bank accounts, credit cards etc.  If the owner of the inserted chip doesn’t cooperate, he will be switched off by the central authorities.  Without a chip, you have no money, and no access to anything.

2 Responses to “Psycho-War Is Being Waged On Britain”