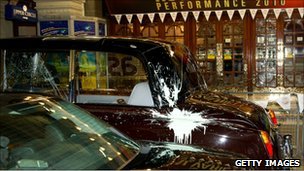 See report on http://www.bbc.co.uk/news/uk-11965454
The car was kicked by a number of demonstrators,  Paint was thrown and a window smashed.
Winston Churchill’s statue was also attacked and vandalised with spray paint.

The protesters seem to be operating faster than the Police.  Or was the Prince Charles incident set up deliberately as commenter William below suggests?

The government will no doubt use this as an excuse to remove rights to gather and demonstrate.  How convenient to have a high profile incident, around which new legislation can be introduced.

The political decision about the fees, which triggered the violence, might well be the right one, but the abuse of the electoral system made by the Lib Dems and other parties promising things to get elected and then immediately dropping them once elected, has got to stop.  The whole system of trust between voters and those who govern is getting close to collapse, putting all figures of authority in danger.

Cameron making his cast-iron promises on an EU referendum is no different, if anything is worse.  The theme of this coalition government is already seen by the public as one of broken promises, and of deceptions made to win elections.  There will have to be a change or the violent outbursts will only get worse.

As for the students, I would ask one question .  Did they vote?  If they don’t even vote but prefer to set about smashing up the country’s infrastructure, any sympathy they may glean will not last long.  Any student who wants to (justifiably) claim that he was cheated by electoral promises, should be asked – did you vote?  The majority, if they are honest, would reply in the negative.  Maybe the young will next time start to vote in elections,if they don’t like the results when they don’t participate.

The TV commentary is odd.  They claim they didn’t know that a large number of demonstrators had gathered at Oxford Street.  It’s most unconvincing, pretending to be unable to orientate, waffling about not knowing what was going on.  There was a large Police presence there.  How the hell did Charles’ car get directed right into the middle of it.  Look at the pictures.  There are thousands of demonstrators.  Very odd.  The answer is that the event was choreographed. 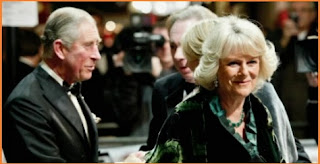 Theatre over.  They enter the London Palladium all smiles.
From Political Betting comments –
Brian Paddick on C4 News suggests that Charles overruled Police advice to cancel the trip to the Palladium. Well, I can understand that he wouldn’t want to be banned from the streets of his future capital by a few unwashed thugs.

by John Lilburne December 10th, 2010 at 19:18
and then he might have had another agenda arranged with Intelligence Services

Lots of ”off with their heads” cheering in faux angry voice off stage,  next to camera pick-up.  Police doing just enough to protect one side of the car leaving the other side available for attack, not filmed.  The window was wide open on a cold night with no attempt made to close it over several seconds.  Maybe the paint was meant to travel inside the car, but the paint came from the wrong side.  Who knows? 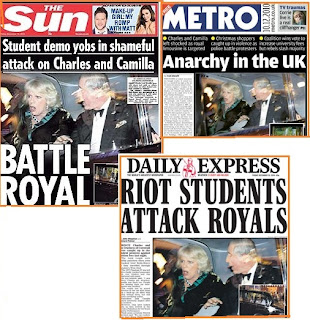 No footage available of this scene.  Only stills.  If I hear a shocking noise, I look round to see what it is, not make a suitably shocked face looking at my wife or eyes front.  Royals are different, aren’t they?
THE NEXT DAY –
Dan Hannan’s blog comments –
Neither brave or stupid. A deliberate piece of theatre to boost the media reach of ”The London Riots” shown to audiences across the world.

Charles was asked to do a bit of intelligence services street theatre to sensationalise these grubby actions of ”students”. Why he complies with such requests is hard to fathom. His environmental fanaticism makes him easy meat for those who want to suppress democratic freedoms across the world.

bigbureaucracy
26 minutes ago
What’s up with Prince Charles? Is it typical for British Royals to go party in the middle of riots? I can’t decide if it was brave or stupid.

4 Responses to “Prince Charles’ Car Attacked. Was It Set Up Deliberately?”