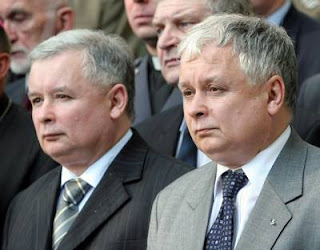 The Polish and the Russian governments promised that all the data surrounding the crash of the Tupolev at Smolensk which killed Polish President Kaczynski and 94 others would be released.  Now 8 months later it appears that the recordings from the Russian air traffic control have still not been released by the Russians, and the Polish government is refusing to release the information that the Russians have at last handed over.

The plan seems to be to blame the Polish crew and again suggest that the area was covered in thick fog, where other sources suggest that visibility on the day was not that bad, and that the crew were highly experienced and had even flown the same journey earlier on on the same day.  The WSJ writes –
Mr. Klich (the Polish investigator) had … complained that Russian investigators hadn’t passed along records of conversations among Russian air-traffic controllers on duty when the plane crashed.
Poland’s prime minister rejected the findings of Russian investigators looking into the April plane crash that killed the Polish president and dozens of other dignitaries, saying their draft report was “indisputably unacceptable” – in what way?  not much indication is given.
The Moscow-based Interstate Aviation Committee gave its draft report to the Polish government last month after complaints from Polish politicians that it was moving too slowly in conducting its probe. The crash, which killed 94 people in addition to the president and first lady, prompted national mourning and has sparked political recriminations.
“In the form it was sent, the report is indisputably unacceptable,” Prime Minister Donald Tusk told reporters Friday on the sidelines of the European Union summit in Brussels. “In the view of negligence, errors and a lack of positive reaction to Polish suggestions, we’re able to say that some conclusions in the report are baseless.”
The findings haven’t been made public, and Mr. Tusk didn’t offer any specifics about what conclusions he found objectionable. The government said earlier that the report would be made public but didn’t say when.
Moscow appeared eager to head off any confrontation. Alexei Sazonov, a spokesman for Russia’s foreign ministry, told Ekho Moskvy radio Friday that his country stands ready to answer any questions Poland has about the crash. He said the two sides should cooperate, adding that it is “important not to politicize the situation.”
There is clearly no intention by anyone to reveal the true cause of the crash that killed Poland’s President, who wanted to stand up against the EU and the Euro, resist the power of the One World Government and enable Poland to survive as an independent country.  The new Prime Minister Tusk seems far more amenable to the demands of The Order.
The Tap Blog is a collective of like-minded researchers and writers who’ve joined forces to distribute information and voice opinions avoided by the world’s media.