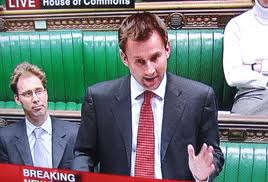 Listening to the recordings of the various slips of the tongue on the BBC yesterday suggests to me the slips were intentional.  Jeremy Hunt is a very impressive young Conservative politician building a strong career.  It’s never too soon to ensure his name is associated with stupidity and comedy.  It is one way to ensure he finds it hard to be taken seriously by the public, to make these ”unintended” (cough) errors..

In fact it is a sign that he’s worrying the powers that be.  Intelligent.  Articulate.  Charming.  Ambitious.  He has to be stopped, if not one way, then in another.

The repeat on Marr gives the clue that this is approved behaviour. Hunt is being sent the message that he’s a marked man. The OWG is desperate to protect Hague and Cameron now they have them in place. Any possible future leader can be ridiculed well in advance. Come on. You think the BBC doesn’t have an agenda?

9 Responses to “Jeremy ”Cunt” Was Intentional”