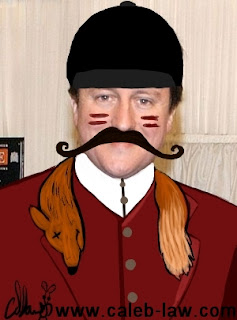 David Cameron who benefited greatly by the activism of hunting communities to ‘win’ the general election, has decided to welch on the deal he promised – the repeal of the Laws making certain aspects of hunting illegal.


Hunting is an independent community which will never be acceptable to the One World Government. Totalitarian governments hate independent-minded social structures, such as the church, farmers, small businessmen and hunting folk. They don’t fit in the intended power structure, where all has to depend on the centralised state.


Any entity which creates and runs itself is not acceptable.   Hunting is about man as he naturally is, free to roam and to associate with others of a like mind.  While hunting exists, man is still free.  So with church communities, small businesses and farming.  For these freedoms, man has to continually fight.  They are not essentially political activities, but in the eyes of those who would enslave mankind, they are seen as a potential focus for opposition.


The secret networks try to form these groups into larger entities and cap them by channelling their energy into a hierarchy, to which they appoint the leadership.  Hitler on the other hand, had all hunting banned.  Stalin had all people who lived independent lives exterminated.  In Britain, so far, they merely make laws to make their lives more and more difficult, and seek out ways to gradually bring about their demise.


Many farm sprays are known to be extremely dangerous for the operatives, for example, and yet they continue to be licensed, and few limits are set to their usage.  A slow poisoning and cramping of initiative seem to be the preferred method of eliminating initiative in Britain by the New World Order, of which David Cameron appears to be the most recent stooge.  The independent-minded elements within the Conservative Party are equally being let down on all the promises Cameron made to them before the election.  Every day that goes by, he seems to indeed be the New Blair.  Our freedom was never more in danger.  Hunting is the bellwether that gives the key.