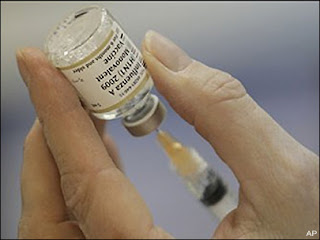 Doctors in Finland have found an association between narcolepsy (falling asleep at any time without warning) and the swine flu jab.  There are 27 suspected cases so far.  They are sufficiently concerned that they have suspended the vaccination programme.

One problem with vaccines that contain mercury ( nearly all of them do as they use a mercury compound as the preservative) is that the effects are cumulative in adults.  In children they can be instant and cause severe and irreversible brain damage.

The Daily Telegraph carried the Finland story on August 27th.   There is as yet no reaction from health authorities in Britain.

Mercury is one of the most poisonous substances known to man.  Why is our own health service injecting it regularly into the population?  There are now 1 in a 100 cases of autism in young males.  One in four has problems with fertility.  Mercury is also associated with Alzheimers and Parkinsons Disease, and other diseases of the nervous system, like narcolepsy.  Not for the nothing is the NHS called the National Death Service.

Bill Gates stated in a speech that vaccination was being used by the One World Government as a method of controlling the world’s population, and it was, he said, expected to reduce the expected levels by about 15%.  If he’s right, this is state murder on a vast scale.  If you love your life, and the life of your children, keep away from as many vaccines as you possibly can.  Doctors don’t seem to have a clue what is going on.  They get about £80 for every swine flu jab they deliver.

A medical assessment panel has awarded £90,000 to the parents of an eighteen year old boy, who was injected with the MMR vaccine as a healthy13 month old baby.  Today he has epileptic fits, is doubly incontinent and cannot stand, talk or feed himself.  His parents have been seeking compensation for thirteen years. DAILY TELEGRAPH.  August 30th 2010.

Even in children who do not evince such major sensitivity to mercury, there can be a lessening of IQ, and a subsequent loss of fertility, and a greater susceptibility to allergies and other lesser symptoms of ill health.  Lives are being ruined and reduced, apparently deliberately.  Little gets into the media, other than the scare stories which drive parents to get the vaccinations.

MMR is a ridiculous vaccination as the risks from Rubella, Measles and Mumps are non-existent in pre-puberty children, vaccination or no.  Getting Mumps is actually safer in young children as mumps causes sterility in older males, which is now when those vaccinated tend to get it, as the vaccine is not effective after childhood.  See earlier post. http://the-tap.blogspot.com/2010/12/britains-got-mumps-wrong.html

and more on the swine flu jab.

Health watchdogs are warning there may be a link between the sf vaccine and increased risk of developing Guillain Barre Syndrome .  The Daily Telegraph reports on the 18th October 2010 of this association, now being investigated.  This is another disease of the nervous system (like narcolepsy) and it can lead to paralysis.  It is fatal where it paralyses the respiratory system.

Of course the regulators deny any association between stuffing mercury into humans and its likely effects on their nervous systems.  The Medicines and Health Care Products Regulatory Agency (MHRA) spokesman said ,’The position was and remains that there is no confirmed evidence that the vaccines are a casue of GBS.’

2 Responses to “Finland Suspends Swine Flu Jabs For A Reason”