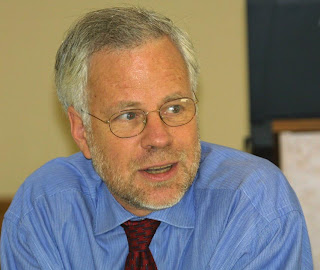 Barry Eichengreen, the American professor who until two years ago was holding seminars titled ‘The Collapse Of The Euro Area’, is now one of the strongest advocates of the Euro being held together.  In his position he would have certainly been visited and put right about his formerly held views, and encouraged to see the future security of his employment as equally important to going down on record as the first economist to predict the Euro’s collapse.

It is therefore always interesting to read his latest version of events whenever he goes public on this topic.
He was quoted in the FT today –
A rush for the exit in Greece could … trigger a stampede in other countries that were seen as at risk of dumping the euro. The result, says Mr. Eichengreen, would be the biggest bank run and financial crisis ever seen, threatening far greater damage to the tightly integrated international banking system than even the collapse of Lehman Brothers.
Even Germany would pay a high price if it abandoned the euro. Its banks have lent heavily to the rest of the euro zone, and would face huge write-downs on assets that were suddenly in a weaker foreign currency. The likely appreciation of a revived German mark would also erase the past decade’s gains in German business competitiveness.
Given the obstacles, Mr. Eichengreen said he views scenarios in which the euro falls apart as “social science fiction.”
“But,” he adds, ”there was a day when we also thought that space travel was science fiction. Remember Jules Verne.”
That last sentence is a nice one, isn’t it.  It’s as if Barry can’t quite forget the Barry Eichengreen of old, who, before politics paid him a visit, believed in the primacy of markets.
All they need to do in Europe is realise that the money they lent is partly lost and the world can get back to work.  The longer they hold out for full value on their debts, demanding 6% on vast amounts from countries like Ireland and Portugal, sums they simply cannot afford, the longer the recession will last.  Yes, it will be a big bump when the Euro goes, but then after that, the road will be clear to grow.

Space travel wasn’t all that hard once they got their minds round it.  It’s just the same with writing down bad debts.  The world just moves on.

Here is the original Barry Eichengreen.