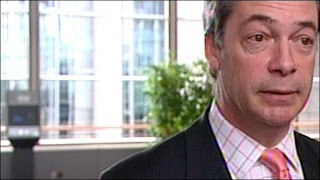 All eyes are on the top three parties since the election.  The sensational story is the decline of the Lib Dems since June 2010.  They’ve dropped 6% as the coalition has pushed out the left wing of the party.


But take note also not not all of these votes have gone to Labour.  Maybe only half have done so.


The rest presumably have swelled the growing ranks of non-voters.  But is there another possibility?  The Conservatives have also dropped since June by 3%.  Could the declining votes  for the Conservatives and some of the Lib Dem be going to another destination, never mentioned by the media?


UKIP has risen from 3% at the election, to 5% in November.  This kind of growth in support for a small party is hugely significant, which is no doubt why the media are being instructed to ignore it.  A surging UKIP means that the Conservatives will have a mountain to climb, come another General Election.


Cameron will respond to the threat of Labour being helped by the collapse of the left wing Lib Dem vote, by being ever more dependent on the coalition, to the point of an electoral arrangement, possibly even of an amalgamation of the parties.


But if this is equally offensive to mainstream conservatives as it is to left wing Lib Demmers, the drift away from the Conservatives and the Lib Dems might yet become critical, to the point that even as a united party, they still can’t win an election outright.  The Hague plan would be in tatters.


That would leave open the possibility that UKIP could become the next necessary ally , if it targeted these votes carefully, and maintained the growth in its support upwards from 5% to nearer 10%.   UKIP could hold the balance of electoral power, at least as far as votes are concerned.


It could equally be that the Lib Dems start to see the gains of their coalition, won at great expense in support, and their grip on power about to be lost via the ballot box.  And as they learn from the experience of exercising real power that the EU blocks most initiatives to reform, they could start to wish to reverse their pro-EU policies.  The threat of a resurgent UKIP could only accelerate that process.


From that point of view, eurosceptics who want to exert leverage onto the political process, should now be considering a vote for UKIP, in any byelections or the European elections.  This would send a powerful message to those currently in power planning their political futures, that the subject of excessive EU power will not be going away.


At the GE I suggested eurosceptics should vote Conservative, and secure as many Conservative eurosceptic backbenchers as we could.  In the coming Oldham byelection, with Cameron and Hague yielding powers to Brussels at every turn, I would suggest that voting for UKIP could now be more fruitful.  But Shhhh!, you won’t be reading this in any media.  Have you noticed the silence?


Even bloggers like Mike Smithson on Politicalbetting don’t want to talk about UKIP these days.  There’s nothing on Guido or Dale either.  I can understand CH not wanting to advertise the UKIP surge.  But as for the other three, who either seek to be sucked into the MSM, or like sucking up to it, there is a deathly hush.   Very odd.


THIS EXTRACT from Open Europe tells you that Cameron has his arm twisted up his back by Vince Cable over Europe – (or alternatively as Twig says, and more likely he is sold out to the EU, and the OWG)

Speaking to MPs in Parliament yesterday, David Cameron confirmed that the UK would be liable for further eurozone bailouts until a permanent bailout fund comes into force in 2013. He said, “We should not have any liability for bailing out the eurozone when the new permanent arrangements come into effect in 2013. With the current emergency arrangements, established under Article 122, we do.”


Are you sure, Mr Cameron?  See below full text of Article 122 of the LIsbon Treaty.


Mr Cameron added that Britain “stands ready to do whatever is required to return the eurozone to stability” and that it “was profoundly not in Britain’s interests to see the break-up of the eurozone”.
Cameron also outlined his proposal for a cap on the EU budget up to 2020. The Guardian argues, “Mr Cameron would be uncharacteristically naive if he thought his budgetary real-terms freeze campaign is either in the bag or that it may not bite back at him in the future…there are no signatures on the deal yet, just promises.”
Open Europe press release Spectator: Persson Telegraph: Sketch Guardian: Leader
In a recorded conversation with Telegraph journalists, Liberal Democrat Business Secretary Vince Cable said of the Coalition Government, “There are some arguments we’ve won, big arguments, on civil liberties issues and questions over Europe”.
Telegraph

The questions for eurosceptic voters must be this – why are the Lib Dems controlling Government Policy on the EU?  Why is Britain being required to bail out the eurozone when we are not members of the eurozone, and Article 122 of the Lisbon Treaty is quite clearly not broad enough to be able to force us to take part in Euro bail outs?  We have to volunteer to take part, effectively.   The coalition is enabling Vince Cable under threat of bringing down the coalition to call the tune over the EU.  There is no sign whatsoever of any optimistic eurosceptic scenario developing.

1. Without prejudice to any other procedures provided for in the Treaties, the Council, on a
proposal from the Commission, may decide, in a spirit of solidarity between Member States,
upon the measures appropriate to the economic situation, in particular if severe difficulties arise
in the supply of certain products, notably in the area of energy.

2. Where a Member State is in difficulties or is seriously threatened with severe difficulties
caused by natural disasters or exceptional occurrences beyond its control, the Council, on a
proposal from the Commission, may grant, under certain conditions, Union financial assistance
to the Member State concerned. The President of the Council shall inform the European
Parliament of the decision taken.

N.B. THERE IS NO COMPULSION TO TAKE PART IN BAIL OUTS AS REGARDS ART. 122

2 Responses to “Don’t Mention Shhhhh! You Know Who.”