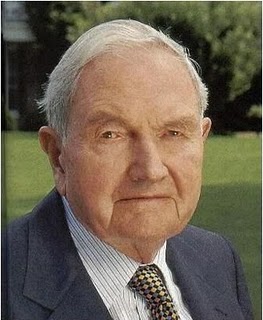 David Rockefeller – ‘Only crackpots say that kind of thing’

Here is a very brave journalist, Canadian Benjamin Fulford – one of the few that’s stepped aside from the mainstream media to address the real issues that affect the world, such as who exactly is running it.  At the time of the interview in 2007, Rockefeller was meeting the Japanese Emperor as he has done many times before.  Fulford lives in Japan and is protected by Japanese interests, and can maintain an independent viewpoint, unlike all others in the system who, he tells us, either cooperate or die.

Fulford’s key point is that the Asians are fed up of financing the USA, when the US is using the money to bring war to the world, and fight wars targeted on limiting Asian power.

This is a must see for anyone who is interested in trying to understand the ‘One World Government’, and what might really be going on behind the scenes.  There are moments of overstatement and unclear thinking in David Fulford’s views, especially towards the end of the clip, where he gets a bit emotional,  but he is still a useful and important source,  as well as being a brave man who has been threatened with death by the One World Government for not cooperating. I guess he can never leave Japan if he wishes to survive.

I wondered at moments if this was an attempt at managed dissent, but I checked out the website, and there is no evidence that I can see of that being the case.

Japan has broadcast in prime time programmes exposing the many questions hanging over 911.  The issue has been discussed in the Japanese Parliament.  There seems little doubt that Japan is stepping aside from following everything coming out of the US in slavish fashion.  Fulford’s story stacks up.

My dear Tap
Do you really trust the word of someone who says he is being protected by The Japanese Mafia. Also someone that get interviews with someone like DR? Absolutely nobody gets interviews with DR, unless they are in some ways in the club.
I can see that you are new to this conspiracy malarky. IMO, they are all in on the game, that is all of them to a greater or lesser extent. They might very well fall out with each other, have the odd lovers tiff so to speak. Jostle for position and relative power and influence. However at the end of the day the ruling class know that they can only go so far, as they are all in the same boat, sailing in more or less the same direction, supping from the same cup, and basically all up to the same tricks.
Benjamin Fulford should, and most likely does know better. After all if I kept the same company as Ben openly professes to keep, I would be suffering from the same highly selective thinking as well.
Opposition to the worlds ruling class is in the main part illusionary.
There is no effective opposition, and there has not been such a thing for at least 200 years. The Sun has not yet set, on the Empire where the Sun never sets. Japan lost its true independence long before the last world war, as did also China. However this does not in any way mean that we should ignore what Ben is telling us. This is because when the ruling elites have the odd disagreement with each other, over this tiny detail or another, people tend to suffer, and can suffer big time.
After all who do you think the Chinese or the Japanese are going to sell their products to if not the western world? They could sell them to each other, but why should they bother, when they can so easily sell them to us. The Chinese and Japanese governments strive to keep control over their own populations every bit as much as ours do. If they tried giving true freedom to their own people, they know only too well the whole experiment would seriously backfire on them both.
The yakusa (Japanese mafia) was most helpful in collecting debts, I remember, from my time trading in Japan.  The courts were ineffective in doing much if a customer didn’t pay, but the yakusa sorted it all out for a 6% cut.  My office manager thought that this approach to debt collection was entirely normal.  I therefore have a slightly rosy view of what must at root be a fairly unpleasant organisation.  I also know from my time there (multiple visits over eight years) that the Japanese were most unwilling to go into Iraq, and were highly critical of Blair and the British supporting Bush.  So some of what Fulford is saying, stacks up with my own experience.
I was in Tokyo on 911 and remember well the days after the event.  Everyone assumed I was an American, and stared straight into my eyes to gauge my reaction to what was happening.  Normally I walk with my eyes up, but they spent a lot of time looking down that week.  The hotels filled with Americans trying to get home, and westerners were all talking together, while the Japanese were unable to fathom how to talk about it at all.  They appeared pleased to see those who had humiliated them in WW2, in turn humiliated, but maybe I imagined that.  The people I know in Japan generally have a horror of war and hate to send any of their citizens to war zones.  That is what Fulford is essentially saying.
But as Atlas says, money interests come first.  And Fulford is hamming it up a bit.
The Tap Blog is a collective of like-minded researchers and writers who’ve joined forces to distribute information and voice opinions avoided by the world’s media.