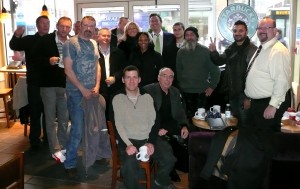 Back at ground level……I stumbled on this sorry tale of the City Of London Police misusing The Counter Terrorist Act.  The case is summed up as follows on the victim’s website –

Ian Puddick, a small business owner, was raided by anti-terrorist police. WHAT WAS HIS CRIME? He reported his wife’s affair with a top city boss to some of her co-workers.


Since then Kroll, a global private investigation frim, the City of London Police Serious Crimes Office and multinational financial giants have placed him under surveillance, brought legal action against him, and placed restraining orders on him.


Puddick Stands trail on 28th February 2010 so don’t let them get away with this.


Stop the corporate takeover of our Police, Our Laws!