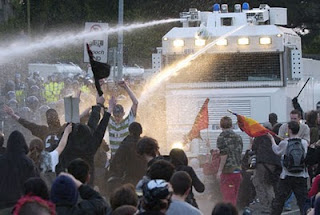 Charles knew he was being directed into a trouble spot during the ‘London Riot’ last week.  Yet he went along with it, despite Police advice that he shouldn’t travel that way – according to Brian Paddick.  That’s because he had a plan with the intelligence services to provide a bit of street theatre to shock the world, and enable the powers that be to justify tooling up for the suppression of future demonstrations.

The ‘students’ are not necessarily all students of course, and they too are part of the street theatre being put on for the consumption of the world’s media, providing the excuse the security services need.

Only days later, the government is out there denying moves to equipping the police with water cannon and other items of crowd repression, which are obviously in the process of being acquired.  http://www.bbc.co.uk/news/uk-11981351

There has been speculation that measures to combat protesters may be toughened up, amid criticism of the handling of the demonstrations.

In the Commons on Monday, Mrs May had been giving a statement on the aftermath of the protests.

Ian Paisley Jnr asked if she could comment on a “request” for two water cannon “from the stock of six” available in Northern Ireland and if she was aware of a “conversation” been the Met Commissioner and the Chief Constable of the Police Service of Northern Ireland.

Mrs May did not address the point but had earlier told MPs that the Home Office had not approved water cannon as a measure that could be used in England and Wales.

She said: “I don’t think anybody wants to see water cannon used on the streets of Britain.”

I guess not, but something’s up.

From comments on Conservative Home –

Sarf Lunnon said…
The Met used to have five water cannon kept at Gravesend, but nobody trained to use them. About a year ago they disappeared (somebody said they’d been sent back to Germany). I was in favour of their use, and argued this at a high level in London. However I was persuaded by a senior Met officer (one of the best I have met) that containment was a better strategy in preventing ‘trashing’.
Water cannon work where there is a front line to hold e.g protecting Parliament. The problem is that when the front line of demonstrators is broken up by water cannon they disperse all over the place and trash everything they come across, as happened last week, be it the Royal Rolls or Oxford Street shops.
So I became a convert to containment.
What has not happened is the public debate on how to handle riotous assembly that I sought from the powers-that-be a year ago.

Interesting to read that.  It seems like the idea of using containment failed, as the rioters were not contained but were released gradually to walk away.  There was no attempt made to stop the rioters damaging important buildings even as they were televised being trashed, and the Police stood yards away.  That was most odd.  It was as if the media wanted damage to make the show, and as for Charles’ car, that was so obviously not a chance occurrence.


The state has reduced its defences against riotous assembly, so that it can get some good TV shocking viewers, and making them angry and then  later tool up and claim really brutal suppression is necessary.