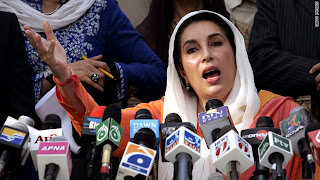 Stories are emanating from Pakistan via CNN that Police were instructed to hose down the place where she was killed by a young suicide bomber, and not to investigate who stood behind her assassination.  Benazir was someone who could have pulled Pakistan together and made the country less of a willing partaker in various wars.  Anyone would think the CIA might have had a hand in her demise, and the subsequent cover-up.  She did not fit the agenda of reducing Pakistan into another war-torn state.
http://edition.cnn.com/2010/WORLD/asiapcf/12/22/pakistan.bhutto.arrests/index.html?eref=ft
But why guess?  Hear Benazir herself describing the situation forecasting her own assassination, and saying that there were groups who were trying to kill her,  but that they should also check out who is financing these groups.  Oh yes, and she also mentioned that Osama Bin Laden had been murdered.  That was clearly not on the instructions of the CIA, who were using him as the chief War On Terror bogeyman.   That was a real ‘Wikileak’.
The Tap Blog is a collective of like-minded researchers and writers who’ve joined forces to distribute information and voice opinions avoided by the world’s media.