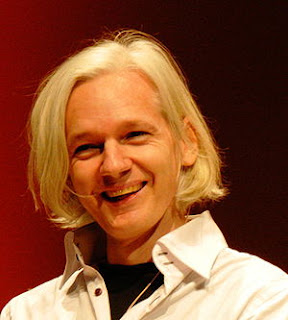 Julian Assange is being made into a Christlike figure by the media.  Why?  Do they really suggest he could simply disappear?  Unlikely.

Julian Assange is becoming a hero of government and corporate ‘transparency’.  The world knows that the news media are not giving us the truth, or at least a mere glimpse of the full truth that exists.  The world knows that politicians are becoming a corrupted breed, and that they answer to the needs of big business and other influences that are often secretive and not available to public view.  Democracy is getting close to the edge, and the western way of life is not far from ceasing to exist.  Only if the internet can start to undo the control that the powerful exert, by exposing their activities and intentions, can the democratic world stand a chance of fighting back.


How can people talk about what they don’t even know?


Within that, the willingness of Wikileaks to publish leaked documents on the internet has been an essential development.  If the people of the world are to come back from a feeling of total cynicism about their governments, the internet is the only hope of rebuilding trust.  All other media and agencies have already been captured to the requirements of powerful groups, individuals and big corporations.


The FT writes –
America is yet to realise, however, that it is in its own interest to be nice to Mr Assange. If harmed, he would become a martyr. WikiLeaks could be transformed from a handful of volunteers to a global movement of politicised geeks clamouring for revenge. Today’s WikiLeaks talks the language of transparency, but it could quickly develop a new code of explicit anti-Americanism, anti-imperialism and anti-globalisation.

I like the date of the book he published.  This guy really does have foresight!
The writer is a visiting scholar at Stanford, and author of ‘The Net Delusion: How Not to Liberate the World’, released in January 2011.

Cyber guerrillas can help US

By Evgeny Morozov
Published: December 3 2010 22:56 | Last updated: December 3 2010 23:47
Others are not so sure about Wikileaks.  They see the latest release as carefully orchestrated to coincide with the coming crackdown on the internet.  Assange is being made into a Christlike figure, who seems to have an almost unbelievable ability to promote his site and name, whiuch he could only achieve with full media network cooperation.
A good report giving a more dubious and cautious response to Wikileaks, being yet more corporate news coverage with all the usual health warnings that requires, is here.  Has Wikileaks been captured by the system?  Many seem to think that it has.  There is nothing or little in the latest releases which wasn’t known previously.  Yet the whole thing has been hyped to the point where Mr and Mrs Average have to start talking about it all.

They promoted Osama Bin Laden to give them cause to invade Afghanistan and Iraq.  Are they now creating Assange into the bogeyman they need to invade the internet?