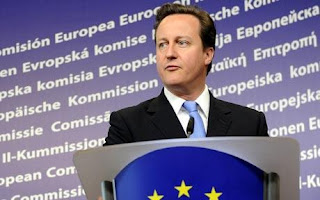 Alex Singleton blogs today that Cameron, despite all his assurances, is pushing for Britain to be integrated into the EU as fast as possible.  http://blogs.telegraph.co.uk/news/author/alexsingleton/

He uses the example of his insisting that Britain’s Patent Office be trashed, and absorbed into the single European Patent office, where the One World Exploitation System can control who gets all the breaks – their own buddies of course.


What David Cameron’s administration is supporting is yet another poorly-conceived act of European integration – and one which would remove patents from democratic control and place them at the mercy of Brussels legislators and the lobbyists who take them for lunch. David Cameron’s support is unforgivable, and this provides another reminder that, on Europe, the current lot of Tories cannot be trusted.


The backbenchers should be getting riled by this, if they are not riled enough already.


David Cameron’s true position on Europe is now clear – he’s an integrationist. His administration has written to the European Commission asking it to invoke a provision in the Lisbon Treaty called “enhanced cooperation”. This allows groups of EU countries to push forward with speedier integration, without every member taking part, and the Government wants to use it to create a single European patent system.