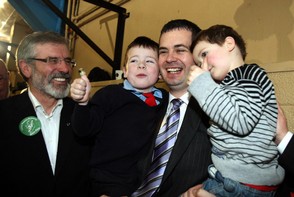 Could Sinn Fein Win The Irish Election?  Gerry Adams Is Resigning his Westminster seat to fight for the seat of Co. Louth in the Dail.  Here Sinn Fein celebrates winning the Donegal South West byelection.  A General Election should soon be triggered by the Greens, who have stated they are abandoning the current governing coalition.
The Belfast Telegraph reports that Sinn Fein won 40% of the vote at the Donegal Byelection last week.  It’s their first byelection win since 1925, and they rose substantially above the other supposed oppositions – Labour and Fine Gael, humiliating governing Fianna Fail.
Gerry Adams is abandoning his Westminster seat, which he never took up, and is standing to become a TD in the upcoming general election.  If he gets the breakthrough he hopes, Sinn Fein could be the dominant party in a new Irish government.
Normally Irish voters regard Sinn Fein as troublemakers in the north, and steer away from voting for them, but with the EU attempting to subjugate Ireland and condemn her to decades of austerity and powerlessness, ordinary Irish people are angry and afraid.  many see a vote for a nationalist party as the right one.  They feel that they are under assault and they want to vigorously defend their freedom.  Where else can they turn?
http://www.belfasttelegraph.co.uk/news/local-national/republic-of-ireland/sinn-fein-wins-by-landslide-in-donegal-southwest-byelection-15015148.html
A Sinn Fein senator who forced the Irish government into a bruising by-election was last night celebrating a landslide victory in one of Fianna Fail’s strongest outposts.
Pearse Doherty (33) bulldozed his way to a seat in Donegal South West with an almost 40pc share of the vote in the party’s first by-election victory since 1925.
It left Fianna Fail tending deep wounds in what was a hugely humiliating defeat in Tanaiste Mary Coughlan’s home constituency.
Just over 55pc of the electorate turned out to vote, with Sinn Fein forging significantly ahead of Fine Gael and Labour as the main beneficiary of a decisive swing away from Fianna Fail.
The father-of-three from Gweedore topped the poll with almost 40pc of the first preference votes, almost outpolling the combined Fianna Fail and Fine Gael total.
Fianna Fail’s Brian O Domhnail and Fine Gael’s Barry O’Neill (37) polled 21pc and 19pc respectively in the three-seater constituency that has been previously dominated by the two main parties.


The results of a Sinn Fein win would be devastating.  This article from the Belfast Telegraph sums up what might well happen if SF makes it –

A majority of people in the Republic of Ireland wants the State to default on debts to bondholders in the country’s stricken banks, according to a poll.
The finding that 57 per cent favour and 43 per cent oppose default reflects a growing view among policymakers and opinion formers that the State simply cannot support the debt burden it has taken on.
The telephone poll of 500 people nationwide – carried out by Sunday Independent/Quantum Research – has also found that a majority of around two-thirds opposes the headline measures in the Government’s four-year plan.
Following Fianna Fail’s loss of the by-election in Donegal last week, the findings will add to political uncertainty as an austerity Budget approaches on December 7.
As Ireland awaited the fine details of the international bailout, which are expected tonight, it was learned last night that the Irish delegation negotiating with the EU-IMF last week raised the issue of default.
“The Europeans went completely mad,” a senior government source said.
Government sources have also denied an RTE News report on Friday that the average annual interest rate on the €85bn EU-IMF bailout would be 6.7 per cent.
Last night the Minister for Finance, Brian Lenihan, told this newspaper that such an interest rate was “not acceptable to me”.
But whatever interest rate is eventually agreed — it is expected to be closer to 6 per cent — the State will be burdened with a colossal annual interest payment of around €5bn over nine years, if or when the bailout is drawn down.
This effective doubling of the interest payments that are already being made has helped to convince the public here that there must now be a default on a portion of the debt — specifically, the portion lent to Irish banks, including senior bonds.
If that was to happen, it would be likely to cause a severe shock to the financial system worldwide and raise the risk of an international meltdown. However, advocates of a default say it is no longer in Ireland’s national interest to prevent senior bondholders taking a hit. 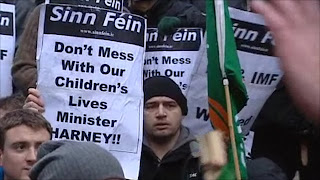 Adams sees the financial crisis as a moment to bring the two Irelands together.  By trying to fit the crisis to his agenda, he could lose the chance to make strides in Ireland’s Parliament, which he could do if he focused solely on the financial crisis.  I guess leopards don’t change spots that easily, or even realise it’s best sometimes to disguise them for a while.  In the comments, my question seems to be answered.  SF will only make it to junior status in a coalition, at best.  If they do better than that, things could get very ugly very quickly.