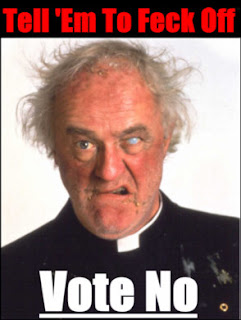 In two days time, Jim Corr’s army will be marching across Dublin, expressing its anger at the bail-out of Ireland’s government by the EU.  The march will be even more effective if it has a targeted message and objective, with banners, posters and leaflets.

What should the primary message be?

The key is to decide where do the Irish really want to go with this?

The message should reach to the conclusion, the endgame and demand it be brought about –

It would be better not to mince words, and advance the agenda, if you want to get noticed –

for example,would be far more worrying to an international audience, and would get very well noticed.

The media otherwise will ignore the demo, and the police will harass it off the streets.

Jim’s good at finding his words to create a heartfelt ten minute appeal on his website, but will he be able to create and deliver a four word campaign slogan equally as well?

If getting rid of the Euro is what you’re about, Jim,  Say so

Take Father Jack, as in the poster from the Lisbon campaign above, and update his message – ”Euronation Stinks” – or maybe that’s trying to be too funny about something very serious, and heartfelt.

It’s not so easy to see this clearly as an outsider, but rest assured, many Brits will be cheering on Jim and his marchers, whatever his primary message and his campaigning style on the day.

UK GUARDIAN – Ireland Should ‘Do An Argentina’ (The Irish﻿ people expected to pay in austerity cuts for﻿ their banks’ sins have another option. Reject the ECB and IMF, ditch the euro)
UK GUARDIAN – Don’t Bail Out Ireland, Free It (Our billions will prolong the misery. Better for the Irish to quit the euro and default on their debts)