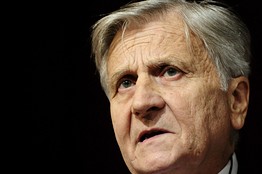 Claude Trichet, President of the ECB

I remember the joke we had at school, of the teacher complaining that ”every time I open my mouth, some stupid fool speaks.”  It demonstrates how far we’ve moved on from those days that such a joke would now not even be understandable, and even if understood,would not be laughed at.  The idea of stupid teachers is no longer a joke, but becoming par for the course, according to some reports.  And even good teachers have been stripped of all authority.

The thing that reminded me of the old joke was the thought that, in a similar way, every time an EU or ECB official opens their mouth to try to allay fears of coming defaults in the eurozone,they keep making matters worse.
On October 29th Merkel scared the world by saying that when the losses come, bond-holders would have to share the losses along with tax-payers.  This immediately sent the Euro scooting down to new lows,and hiked up bond rates in Ireland triggering a severe political crisis.
Trichet the ECB President tried to stop her from taking this path in October, rightly anticipating what its effects would be.  But Sarkozy supported her, and the crisis bit deep once more.
But Trichet himself is now in the business of trying to talk the crisis down, hoping to undo some of the damage done by the Merkel declaration of losses to be borne by investors.  His intervention, however, is also bound to only make matters even worse than they are.  In his latest announcement, he tries to differentiate between private losses and government losses amongst bond-holders, saying bonds owned by governments would be protected from loss.
The WSJ writes –
Under the agreement, the EU would only ask private-sector creditors to accept losses, if the country in trouble was unanimously voted as insolvent. Mr. Trichet said added that in the cases of Greece and Ireland, the two countries that have received aid this year, both are solvent.
In his opening remarks to the EU parliament, Mr. Trichet repeated his familiar stance on the issue of foreign-exchange markets and on the future governance of Europe’s economic and monetary union.
This will of course go down like a lead balloon with private bond-holders.  They are the only ones free to cut and run from their holdings of failing government paper, and they will now do so, faster and in greater numbers than before.  I guess the markets tomorrow will punish Trichet’s folly while we wait for the next EU leader to open their mouth.
Whichever direction they want to channel losses into with their pronouncements from on high, they merely add to the certainty that losses are imminent.  Like the teacher of old, they might do better just to keep their mouths shut.  But that is not the way with people who see themselves and their positions as all important, and investors as mere financial cannon fodder.