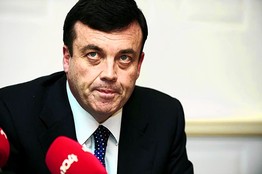 The Irish struggled hard for independence ninety years ago.  Can you imagine the humiliation for a proud country having to ask to be bailed out by other countries, including the former colonial power?  In the face of this, the Irish government is refusing to ask for a bail-out despite the government’s bonds hitting record levels of interest rate, with investors, fearing a default, dumping them, and many also removing their funds from Irish banks.

The government has enough money to get through til next summer at least.  A renewed austerity budget cutting another 6 Billion Euros would enable the country to survive longer than that, and by using up the country’s pension savings, it could survive quite a long time.

The problem is the banks that carry Ireland’s name, such as Allied Irish, which has lost so much money that it is estimated to owe hundreds of billions to other institutions around Europe.  The banks have secured their loans on property, the price of which is crashing, and they are into vast losses on derivatives trading, where they imagined the trades were made in fair contest.  No one suspected that central bankers were manipulating markets, yet the Bank of International Settlements, based in Switzerland, the privately owned central bankers’ central bank is estimated to have made no less than $19 trillion of gains in derivative markets in 2009 alone.

That is where the mere clearing bankers have lost their money.

It would make sense for the BIS to lend the gains back to the banks that they cleaned out by taking their bets and then manipulating markets against them.  The situation is as bad as if there were thousands of Nick Leesons (the guy who broke Barings Bank) all bringing their employing banks crashing down together.  Yet this time the situation is so bad, it doesn’t even make the newspapers.

The BIS accepts no responsibility for the situation it has helped to create.  Far from it, the BIS expects to use the bankruptcy of banks and countries to further its political aims, which are connected to central banking involvement in the One World Government programme.  They support the EU, and the removal of power from nation states, and the situation of Ireland and its closeness to falling into their clutches is exactly the situation they intended in the first place to bring about by their financial machinations.

Bail-outs are not mere charity.  They are also a way to exert power over the bailed.  The EU for example is already demanding that Ireland abandons its 12.5% Corporation Tax as a pre-condition, which, during the Lisbon referendum campaigns was said to be safe.  It was all lies, of course.

Peter Oborne in today’s Telegraph suggests the easy way out for Ireland is to default and quit the Euro.  That would be entirely justified as Ireland has been ripped off by the same power structure that now desires and demands Ireland’s submission.

The problem is the Irish political elite that still basically wants to sell out to the EU, and secure their place in the OWG money train, just as Blair and Mandelson have done.  There might be one other factor to consider though, for the bureaucrats and the central bankers that think Ireland is spent, and now ready to roll over.  Irish pride.  Irish culture has survived thousands of years, against all comers.  Why would the Irish choose now as the moment to lie down and submit to foreign powers?  They’d do far better to cut and run as Oborne suggests, devalue and quit the Euro.

What would the EU do?  Invade?

The banks could default on their debts, and the Irish government could relaunch the Punt.  Don’t worry about the BIS.  They’ve got plenty of money to lend back to the people they cheated.  The defaults will only be as serious as the central bankers want them to be.  That’s where their money’s gone to.  They could just as simply ask for it back again.  They call it the luck of the Irish.  They should try a bit of it.  They might be surprised what they can get away with.