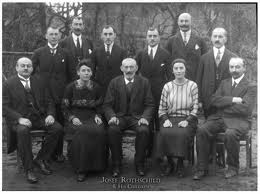 The Rothschild Family have been in the central banking game a while.

Here is Lord James on Sky telling the world about the world’s central bankers who are getting worried enough to be offering the British government free money.

Lord James describes his dealings with a secret organisation called “Foundation X” to Sky News.  He claims that it “wants to help save the world”, and wishes to lend billions to Britain, interest free – in order to support a “massive improvement” in the jobs market, fund renewable energy, build schools and hospitals, and help the construction of Crossrail – which it will begin to provide the necessary funds for, if it receives a positive answer from the Government within the next week, by Christmas Day.

It has bemused all commenters on Play Political, which is hardly surprising, as most people think the central banks are part of the government of each country.  They are not.  The Bank Of England for example is privately owned, using a nominee system to hide the true owners.  (The link is also on Conservativehome as the lead story).

My comments on PP –

International bankers are desperate to save the Euro and the western economies. These guys are the counterparty to all the bankrupt banks, who we and the Europeans have had to bail out, and is where all the money has gone. They’ve milked so much out of the system (trillions literally) that they are now worried about what they’ve done. They now want to find a way to bring back the money they’ve manipulated out of the system and put it back in, or all their fiat currency gains could become as nothing if the Euro collapses and the British financial system to boot. The Irish is already in terminal collapse. These people have become so powerful that they are in effect the government in financial terms.
There have been many reports about the wealth of the world’s central banks, which are privately owned. The Bank of England, for example, is owned by nominees on behalf of unknown people, and the same can be said for most of the world’s central banks. They have used this position to manipulate markets and milk them since time immemorial, yet with computers and financial derivative markets at their disposal, they’ve been able to more or less suck all the wealth out of the world’s markets and countries from a desk top.
The problem is now that they’ve sucked all the juice out of the lemon and they’re frightened. The problem is as their existence has been kept quiet, and never appears in any news reports other than this amateurish attempt, no one can believe what they are saying. They are trying to hand over the money, but also to dictate how it is to be used, demanding that Crossrail be built as a matter or urgency, for example. The reason for that is that most of the banker’s collateral is in real estate, and they are terrified of a collapse in British property prices, exposing them to big losses.
ReplyNovember 07, 2010 at 12:44 AM

Tapestry said…
If you actually want to try and understand all this, settle down for a good hour and watch these videos on youtube by Joan Veon an American journalist who has followed the world’s central banking story for years. She is extremely unnerved by what’s been happening, as would any sane normal human being.
Just think about it. The Fed is issuing $600 trillion, just last week. Yet who owns the Fed, and staffs it? The very same people, such as Goldman Sachs, who own the banks and financial organisations that stand to gain the most by money being pumped into equity markets (securities in US), and commodities. Why does it help Ordinary Joe if oil is jacked up to $100 a barrel, or $140 as it was in 2008? These market manipulations are massive and milk the money out of the real economy. Yet the Fed claims it is helping employment.
The one market they can’t manipulate on exchanges is real estate. And that one is the one that’s falling away and out of their control. Trying to get the government to borrow huge sums of money interest free for projects like Crossrail is one way they can try and stop that market collapsing, just as they are persuading the American government to get into vast debt to jack up share prices. Yet each time they take out an IOU, to lend against, they specify the period of the loan, and in the US they are not taking anything over ten years now, which is an indication of their growing worry about getting paid back in the longer term as the depression kicks in.
That’s the one thing this interview failed to give. If this is a gift, then call it that. If it’s a loan, then how much is the interest rate? And what is the period of payback? If it’s a hundred years, at 0.1%, we’ll take it. We’ll need it anyway to undo all the damage done to our banks, which is in trillions of Pounds, and to keep the depression at bay.
The problem is that money has got disconnected from government. It needs bringing back in. Central banking needs to be opened up, understood and controlled. The next stop will be that the Fed’s interventions in the US will start to fail as a way to prop up share prices and commodity prices. Then what will they do?
ReplyNovember 07, 2010 at 01:12 AM

Tapestry said…
If the government is not engaged in negotiation with the world’s central bankers, I would suggest that they get together as a matter of urgency. They both need each other and for the rest of us, it could be a matter of life and death, literally. The whole edifice came close to collapse two years ago. It is obviously getting close a second time. The government should find out now how much money is available, on what terms and when. The programmes like Crossrail should all be started, and Boris’ airport to boot, not just to do the banker’s bidding, for our own future security. We have no choice. We are lucky that they see London as one place they can still trust the people enough to deliver a recovery. But in future we should have the whole central banking system brought under control. It has been allowed to outgrow the world’s real economy to the point of total instability. It must never be allowed to happen again.
ReplyNovember 07, 2010 at 01:18 AM

Tapestry said…
http://www.youtube.com/watch?v=vEJdeWvGIZU
IReplyIf you are new to all of this, try not to get worked up and anxious.  Once the truth starts to come out, there is more chance of something being done to sort out the mess they’ve created.


Central Bankers have got into the habit of seeing themselves as above it all, and not really part of the human race, which is merely theirs to manipulate and exploit.


They are now finding out, or just beginning to find out, that they are just as much a part of the financial system as everyone else.


In some ways the moment of maximum danger is past.  But while central banking remains a secret massively powerful entity beyond the control of governments and peoples, it will still be a danger.


By reading and educating yourself and others, you are doing something to bring the situation under control.


The central bankers themselves are frightened and want to come in from the cold.  The Lord James video is entirely genuine, in my opinion, and shows that they want to talk.


They know that if the system collapses, they will be found out and strung up by the mob.  They are trying to do something , a bit late in the day, but at least something is starting to happen.


See also http://the-tap.blogspot.com/2010/11/foundation-x-is-prince-charles.html
The Tap Blog is a collective of like-minded researchers and writers who’ve joined forces to distribute information and voice opinions avoided by the world’s media.