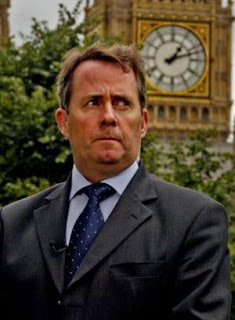 Liam Fox…………..Please.  Better late than never.
85% of Conservative members want powers repatriated from the EU.  49% want to quit altogether.   75% insist on at least a freeze in contributions and preferably a reduction in line with spending cuts being made in Britain – i.e 25%.

Cameron is simply not representing the views of Conservatives by agreeing to the 2.9% EU budget increase, even if there are vague promises of a freeze next year.  He is promising Merkel he will not be considering the holding of a referendum on Britain’s membership, or demanding a ‘loss of powers’ referendum for the proposed Lisbon Treaty changes which effectively convert the EU into an economic government for Europe.

In short Cameron is not fit for purpose.  He is not representing the views of the people who elected him, and nor does he intend to do so.   Conservative MPs have to consider what to do next.

They will be faced with a resurgent UKIP in 2015, which could knock many of them out of Parliament, if they don’t act now to remove Cameron.  Labour are imploding.  The Lib Dems have halved their support.  There will never be a better time to take on the corrupt elite that sits in control of the Conservative Party.    The first moves to remove Cameron could be started by a number of MPs writing to the 1922 Committee for Cameron to face a vote of confidence.

There is no need to threaten Osborne’s financial strategy.  The EU is a major threat to Britain’s fiscal discipline as it is.  Cameron will have to be got rid of,  as he has no intention of stopping our finances being ruined by Europe.  It were better though that he was got rid of now, and a new leader put in place.  There are plenty of highly talented individuals who would stop the EU from ruining us, and could carry on from here.  Cameron was brought in as the me-too Blair.  There is no need for such a person any longer.  Merely a responsible leader who realises that our financial needs are paramount, and caving in to making extra payments to the EU is no longer acceptable.  Strike now, is my advice, and strike hard.

Labour enjoy more support amongst women than amongst men, a poll from Com Res suggests, confirming what many polls have indicated in the past. This appeared in PB comments this morning –

ComRes:
“The findings point to a “gender gap” after predictions that the cuts will hurt women more than men, partly because of the 500,000 job losses expected in the public sector over the next four years. The Tories are ahead among men, by 37 per cent to 36 per cent, but trail Labour by four points among women (38 to 34 per cent).”
http://www.independent.co.uk/news/uk/politics/spending-cuts-leave-tories-behind-labour-in-poll-2122618.html

The point is that the cuts will reinforce this gender bias.  Conservatives need to strengthen their vote amongst the older voters who are growing in importance, and amongst men to counter this.  The best way to do that would be to go for it on the EU.  The pulling back of UKIP and non-voters into the Conservative tent could be worth 10% .  By 2015, maybe bigger.  Cameron’s Lib Dem strategy is in effective tatters, with support for the Lib Dems collapsing.  The future has to be in bringing UKIP back on board, and other rebels who’ve wandered off disgusted by the Conservative sell-out, which continues to this day.


It might not only be UKIP which attacks from the eurosceptic wing.  Ed Miliband has also noticed the Achilles heel, that Cameron’s feeble EU negotiations present.  We might soon be treated to a Labour leader finding that their views are relatively eurosceptic, compared to the Conservative elite that holds the party in its clutches.

In a Commons debate yesterday, David Cameron was accused of backtracking on his initial promise to freeze the EU’s budget by Labour and Liberal Democrat MPs including Charles Kennedy who welcomed the PM from “one long-standing pro-European… to another”. Ed Miliband, leader of the opposition, criticised Cameron saying that instead of saying “no, no, no”, like Margaret Thatcher, he said “no, maybe, oh go on then”.
On the Coffee House Spectator blog, Open Europe’s Mats Persson notes that when Cameron was asked by Ed Miliband if he would he be repatriating powers, he pointed to a reassurance that the UK’s opt out from economic sanctions remained intact, which was not really in question in the first place, and spoke of “progress on the EU budget”. Mats argues, “It slipped through virtually unnoticed, but this second remark is actually quite worrying. Cameron’s answer suggested that he has agreed to support Merkel’s drive for treaty change in return for 12 other EU leaders signing a letter supporting a 2.9 percent cap on the 2011 EU budget increase and a declaration that future EU budgets should be linked to the state of national public finances. That is a very small price for agreeing a new EU treaty”.
For the outburst of rage against my views written on EUReferendum, I have left a comment.  My support for Cameron was a. conditional, as I explained frequently at the time of the election.  And b. My support for the Conservatives was based on the need to elect as many Conservative backbenchers as possible who would/could act as the agents of his subsequent removal.
There was no point in voting UKIP which very nearly allowed Brown to remain in power.  Those voting for UKIP only helped the Liberal Democrats.    My turn against Cameron was not caused by the proposed military alliance with France, as Richard North seems to suggest, but to do with his agreeing to EU economic governance of the EU, through changing the meaning of the Lisbon Treaty, by extending and strengthening Article 122 to cover threats to the Euro, without calling for  a referendum.  OK, Richard?
If UKIP can get a surge on the back of Cameron’s deceptiveness, that might pressure Conservatives into acting.  Now is the right time to try, not before the election.
The Tap Blog is a collective of like-minded researchers and writers who’ve joined forces to distribute information and voice opinions avoided by the world’s media.