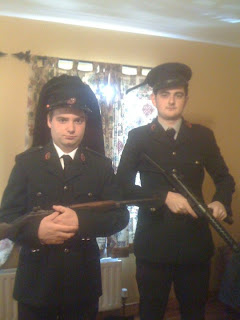 Connor Morgan, Sinn Fein’s Young Speaker – as if in a movie

I wrote a comment on Iain Dale’s blog which was rejected as too large.  Iain is drawing attention to the fact that Sin Fein are speaking in the Youth Parliament today at Westminster, without swearing loyalty to the Queen, in Gaelic.  This is my comment

While Airey Neave was undoubtedly murdered by the INLA, they have always said that he was not targeted by them, but the details of how to murder him were passed to them from ”others”.


Enoch Powell believed the CIA targeted Mountbatten, Neave and other key British nationalists, presumably to facilitate our entry into the EU.  Neave died the day that it became obvious Thatcher would win the leadership.  The CIA had decided it wanted Britain submerged inside the EU, and used the INLA to do its dirty work.


Any Conservative leader who stands against the EU publicly is sorted in fairly short order – Thatcher, IDS are the primary examples.  Cameron has chosen to back down and say nothing to the current raft of EU abuses of our freedoms.  Then again maybe he knows what the consequences would be if he did.


If Sinn Fein won’t swear loyalty to the Queen, will they swear loyalty and bow down to the EU?  That is who they and we serve nowadays, and is why Ireland is a bankrupt country inside the Euro.  Irish and British nationalists have much in common in the certainty that we must both somehow find a way out of our EU imprisonment.


If the young speaker finds it easier to imply threats of violence against Britain, than face the reality of the current power structure, he is living in the past, and should open his eyes.


We are both prisoners of a new empire now.  It threatens us all with a collapse of civilised standards – of our economies, of our democracies and our respective nations.


I hope the young Irish speaker addresses the real culprits, and doesn’t merely look deep into the past to run over old ground where there is already an agreement in place, that if a majority of the people of Northern Ireland desire separation from Britain, it would have a democratic basis, and would take place.


You might hope, given such an agreement, that Sinn Fein would see that we need to cooperate to face a common threat now.  Or will it be like WW2 all over again, where past hatreds are seen as more important than current realities?  Hitler was delighted, and Ireland escaped the worst.


This time Ireland’s economy is facing serious degradation sooner than Britain’s, but the solution will be as before.  Only through cooperation between fellow independent nations will we find the way out of the mess that’s been created by the crazed dreams of economic empire by Euro-idealists, as they reach desperately for the next bail-out, until finally their economic rust bucket cracks.


As for his choice of language, who cares? We could have Welsh spoken again and Cornish if it helped the cause of democracy.  Gaelic is just as welcome, whether it be Brythonic , or an earlier form of the language.