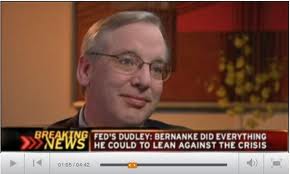 The world hangs on tenterhooks waiting for the decision of a few individuals who believe themselves able to turn economies around from depression to recovery at the stroke of a pen, or at least that’s what they claim. It wouldn’t be quite so bad if the people involved were not the same ones who stand to profit the most personally by their own supposedly altruistic interventions.
The Fed, through the coming announcement of Mr Bernanke on Friday will inform the world how many trillions of dollars it will be willing to splurge into asset markets, and how much therefore surging commodity and share prices will be likely to rise on the back of it.

The notion that surging asset prices in some way assists ordinary Joe to find a job is one that escapes me.  If oil were half the price that it currently is, and wheat and rice, he would find it much easier to heat his home and feed his family, and find a job in addition.  This seems not to occur to the likes of William Dudley, the holder of the Goldman Sachs seat in the Federal Reserve, a privately owned bank which has the monopolistic rights to issue money to the American government, municipalities and corporations.


The instant result of the coming much talked of Quantitative Easing 2, which Bernake will announce tomorrow, will certainly jack up massively the level of Goldman Sachs’ profits.  That is without question, and those of the hedge funds and trend followers who ride like barnacles glued to Goldman Sachs’ ‘hull, as they fix ever bigger market swings in their own favour.


This from Jon Nadler on Kitco:-


Goldman Sachs sees the Fed’s expected easing as helping the US avoid the “very bad” fallout from a renewed recession. Goldman sees the American economy as only “fairly bad” in the coming half-to-three-quarter of a year (a lot to say, all in a day, by one firm; a firm whose seat at the Fed is filled by…Mr. Dudley).


Well, we know at least that which is motivating the appetite among risk-takers despite such reassuring language: the fact that they pay no attention to it and see only the outcome of it in perpetually cheaper to play-with dollars.
The claimed motivation is that the QE will help Ordinary Joe find work and pay his bills.  The effect will be exactly the opposite of that.  Joe will find life much easier when the financial wreckers who’ve got the world economy in a vice-like grip which they endlessly use to create massive profits and bonuses for themselves and their associates through surging asset prices and then crashing them, are brought to heel.
This will not happen through legislation, at least not until they’ve orchestrated the biggest crash imaginable sending millions into destitution, which is the only possible final scene of this macabre plot being played out in waves and surges until the final wave overwhelms everybody and every financial organisation and institution.  Only then will people finally realise that the people they are instinctively trusting to look after them after a long history of trust being built by earlier holders of the privilege, are in fact now manipulating all the levers placed in their hands to accumulate massive wealth and power all for themselves, at the moment beyond the reach of any government.
Ordinary Joe has a bleak future while these vandals are wrecking the glass house of the financial world.  Robert Dudley won’t be feeling any remorse, as his proposed actions jack up commodities and he reaps his fat profits.  That’s for sure.
Nadler – There is no telling what disappointment might result should the Fed come up short of such generous expectations.
Meanwhile, the most vocal among those on The Fed pushing for said accommodation, William Dudley (himself), framed the Fed’s presumptively imminent action by stating that he is “…mindful that [the Fed’s actions] could be interpreted as a policy of monetizing the federal debt. However, I regard this view to be fundamentally mistaken. It misses the point of what would be motivating the Federal Reserve.”

Forgive me for having my doubts as to the motivation of the individuals running the Fed, who also run big investment banks like Goldman Sachs.  The foxes are in charge of the chickens.  The chickens don’t suspect a thing.

William C. Dudley became the 10th president and chief executive officer of the Federal Reserve Bank of New York on January 27, 2009. In that capacity, he serves as the vice chairman and a permanent member of the Federal Open Market Committee (FOMC), the group responsible for formulating the nation’s monetary policy.   (The BIS is the Central bankers’Central Bank located in Switzerland, which is another privately owned business which controls the world’s money supply, trusted to act in the interests of the public, but which, it has to be remembered, is a profit-making organisation seeking its own interests).

Mr. Dudley had been executive vice president of the Markets Group at the New York Fed, where he also managed the System Open Market Account for the FOMC. The Markets Group oversees domestic open market and foreign exchange trading operations and the provisions of account services to foreign central banks.

Prior to joining the Bank in 2007, Mr. Dudley was a partner and managing director at Goldman, Sachs & Company and was the firm’s chief U.S. economist for a decade. Earlier in his career at Goldman Sachs, he had a variety of roles including a stint when he was responsible for the firm’s foreign exchange forecasts. Prior to joining Goldman Sachs in 1986, he was a vice president at the former Morgan Guaranty Trust Company. Mr. Dudley was an economist at the Federal Reserve Board from 1981 to 1983.

Mr. Dudley received his doctorate in economics from the University of California, Berkeley in 1982 and a bachelor’s degree from New College of Florida in 1974.

Mr. Dudley serves as chairman of the G-10 Committee on Payment and Settlement Systems of the Bank for International Settlements.

He is a member of the board of trustees of the Economic Club of New York.

He was a member of the Technical Consultants Group to the Congressional Budget Office, 1999-2005.