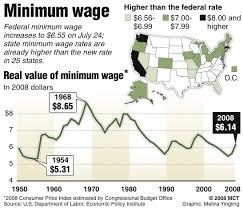 The problem with the IDS get-Britain-back to work campaign is going to be the internationally uncompetitive high level of the minimum wage. ‘

We are hopelessly uncompetitive with the MW at $9.50 an hour, compared to the USA’s $7, which was jacked up from $5 in 2007, and has caused widespread unemployment there. US workers produce 50% more than British. Our rate should be about $4.50 if we want to be competitive and get the 6 million idle hands back to work in Britain.

If tax is removed for lower paid workers, people on GBP 3.50 an hour could take home GBP 140 a week, and be able to find starter jobs and contribute to their household.  This indeed is the ratefor 18 year olds who’ve completed their education.  But the rate gets jacked up to the full amount by age 21.

In US tipped Labour has MW of $2 an hour. Britain could do the same and get millions back to work.
If we want to get people off welfare we have to set minimum pay rates which enable people to get jobs more easily.
It’s obvious.
This will not be easy to sell, but should be part of IDS’ programme of helping people to help themselves, and getting free of state dependency.
Business will only invest in jobs if the investment stands a chance of paying off.  It is pointless doing all the other things the government is talking about doing, unless they halve the minimum wage and let the market set the right rate for the job of getting Britain back to work.  For some reason this fact has escaped everyones’ notice.  It could prove to be a costly oversight.

Britain has a minimum wage 20% higher than the USA, when our national productivity is 30% lower.  There should be a far lower national minimum wage in any case, as wage rates in some areas need to be lower as businesses are less profitable in slower parts of the economy and cannot afford the same levels as, for example, the south east.  The higher wages and benefits have enabled supermarkets to set higher prices nationally, and suck money from the social security system, when retail prices could be set far lower.

They imagined they were redistributing wealth.  In fact they’ve simply redistributed inflation and unemployment by interfering in the marketplace,.

8 Responses to “The Missing Link In The Conservative Jigsaw”