Cameron’s new version of the oak tree logo, which has detached the word Conservative and gone ”British”
Throughout the 2005 General Election campaign, Michael Howard used the same slogan.  It seemed to freeze criticism, and yet it gave little guide as to what his policies were in any detail.  The phrase he used was, ‘ we’ve got to do what’s best for Britain‘.
David Cameron has reverted to a very similar slogan for the Conservative Party Conference starting today.
”Together In The National Interest”.
The earlier version worked well in 2005, and the new one will no doubt be equally effective in 2010.
Ahem… I wrote the original in 2000.  I was asked to make leaflets by UKIP prior to the General Election, which I did.  Millions were printed and they were adopted by the Party for the election campaign.  I badged them all ”what’s best for Britain”, the reason being that I wasn’t sure if I had full party backing until late in the day, and I used the name ”what’s best for Britain” as a catch-all phrase while the Party made up its mind if it wanted the leaflets or not.
Nigel Farage asked me personally to get them printed and sent far and wide but he was not party leader at that time.  It was all very confusing.
I cannot be absolutely sure, but when my phrase turned up four years later as the Conservative Party campaign slogan, it seemed natural to assume they had borrowed it from UKIP, maybe by David Cameron in person, as he was the assistant to Michael Howard.
If he did, it’s nice to see him still demonstrating the truth behind the phrase – ”imitation is the sincerest form of flattery”, ten years later.
See Originals here –
http://the-tap.blogspot.com/2007/12/disappeared.html
Here’s the Muffled Vociferation for Witterings From Witney version! 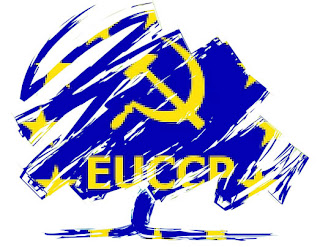 Going back to John Major in 1997, wasn’t the slogan then ”In Europe, Not Run By Europe”?, or was that replaced with the remarkably prescient ”New Labour.  New Danger.”
That was followed by Hague in 2001 with ”Keep The Pound (for one Parliament).
Michael Howard followed that with ”We’ve got to do what’s best for Britain” in 2005.
After many forgettable and nondescript slogans since 2005, such as ”A New Direction”,  and ”We Can’t Go On Like This”, we now have for this conference ”Together In The National Interest” .
It’s progress of a kind.  We’re all now waiting for the next one.  What will it be?  Once we get the word ”índependence”’creeping back in, then it will be time to celebrate, when Ukippers rejoin the flag.  At least the nation now gets a mention, which is a step in the right direction.
After five more years financial battering, people will be receptive to making our own decisions once again, free from the corrupt megalomania of Brussels.  How about, for 2015, ”Strength In Independence”.   I am sure the Union Jacked oak tree would feel most at home with such a slogan, although somehow I can’t see Cameron fronting up such a campaign.
The Tap Blog is a collective of like-minded researchers and writers who’ve joined forces to distribute information and voice opinions avoided by the world’s media.

One Response to “I Write The Songs”