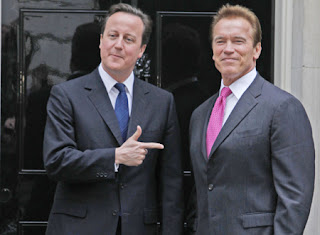 Cameron quips that Arnie’s Going To Help Terminate The Deficit

Yet that again puts all the emphasis is on the accumulating debts, and none on the paucity of Britain’s ownership of assets.

If Britain tolerated wealth as do most other countries, our debts would not be hurting as badly.  Get rid of IHT or at least halve it.  Stop driving private wealth out of the country, and our debts might not need terminating quite as urgently.

To debts that are too high,  the answer is not merely less of them.  The better answer is having increasing wealth to offset.

California has huge debts but also huge wealth and wealthy individuals who enable Arnie to swagger around with his pockets empty.

It is Britain’s disconnected financial culture which sees debt as good and fair, and at all times necessary, but wealth, because it falls unequally across the population, as bad.  So what!  At least we would not be so bust as we are if we tolerated wealth.

If more people owned houses and other assets outright and were wealthy without debt, prices would not collapse as fast as they do in a slump.  Less people would be forced sellers of assets.

Governments always get into debt.  They are congenitally irresponsible.  Private people and families are far better recipients and holders of long term wealth, which benefits the whole country by keeping us creditworthy.

Cameron should not terminate debt, but terminate Britain’s inability to perceive wealth as a social benefit to all of us.  He should start by halving the rate of IHT.

3 Responses to “Cameron Should Terminate Not Debt But Jealousy”