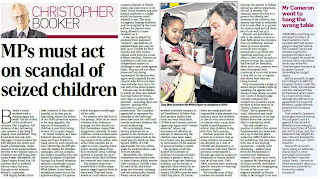 I’m not in a good internet location currently but this article by Booker caught my attention.  This is the second time Booker’s had a go at the scandalous targeted system of removal of children from families (Raoul Moat being but one of those targeted for the removal of his kids).  This topic is probably the most disturbing of all those to be found on the blogosphere about out of control state power.

The only explanation that I can find is that given by Brian Gerish of UK Column that networks of paeophiles are effectively running our country’s child ”protection” services.  As Kate McCann discovered, there is a huge child-pornography and prostitution industry that operates across Europe, untroubled by police, lawyers, politicians or anyone else.

At least and at last Booker’s getting onto this topic.  How long before the public cotton to what kind of client state Labour has created these last ten and more years?  This needs a going over from Guido, and some naming and shaming.

And EUreferendum is also aware of the true horror of what must be going on unseen, as Blair’s system of targeted removal of children has played into the hands of paedophiles.

And note that the state paedophile networks also wants an end to the charity looking for missing children.  The work of this charity is being taken over by a new European agency called Missing Children Europe (See http://the-tap.blogspot.com/2009/09/german-government-wants-children-groped.html), which wants to control the search for missing children and combine it with hearing allegations of abuse, which any citizen can make against any other citizen.  This will be a great way to impose fear over the population, and is certainly the least attractice aspect of the coming One World Government.