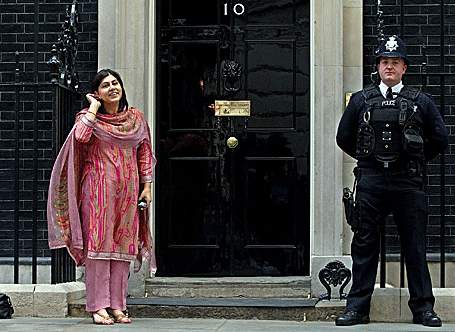 
There are at least three seats where we lost, where we didn’t gain the seat, based on electoral fraud.


Let’s have a guess then.  At least three seats is playing the allegations down to the defensible minimum statement of the real situation.  It means there were potentially thirty seats where fraud lost the Conservatives seats, and awarded them to Labour.  The fraud, which Sayeeda says was based predominantly amongst Asian voters,  was well known about by Gordon Brown, and the New Labour zombies, let’s have no doubt.  Without it, they would have had thirty less seats, and Conservative thirty more, giving a clear outright majority to Conservative.


Nick Clegg is tidying up the system for postal and proxy voting.   If he does a good job, Labour will have not a chance of becoming the country’s government for a generation, once the constituencies have been equalised, if overseas voters are brought back in and encouraged to vote, and if there is an electoral pact with the Lib Dems, Labour might be driven down to a tiny number of seats.

Officials at Calderdale Council, which covers Halifax, say the signatures of every single postal ballot that arrived on the day of the general election were checked throughout the night. But Philip Allott, the Conservative’s candidate who lost to Labour, says the current vote-checking system cannot tell whether someone has voted multiple times using more than one postal vote.

“It is possible in Calderdale to apply for multiple postal votes because although the signature of the application form and security slip when the person votes are cross-checked via scanning, the scanner does not check whether the person has voted twice or more,” he said. “We can’t say for sure whether fraudulent voting affected the outcome but I do believe there is enough prima facie evidence to show that fraud happened. It’s simply not good for democracy when this sort of uncertainty exists.”

The Conservatives in Halifax say that they cannot afford to launch a legal challenge which would need to be submitted by tomorrow. Mr Allott said the rules stating that complaints have to be launched within 21 days of an election meant there was not enough time or money to gather evidence.

So none of it will come to light.


Except when it does as here –

Police to investigate allegations of voter fraud in Halifax and also Poplar and Limehouse
“Police are to investigate voting in at least two constituencies that the Conservatives believe they may have lost at the general election because of fraud. Dossiers compiled by Tory activists in Halifax, West Yorkshire, and Poplar and Limehouse, east London, have been passed to the authorities. Questions have also been raised about polling in Bradford West.” – The Sunday Times (£)
The Tap Blog is a collective of like-minded researchers and writers who’ve joined forces to distribute information and voice opinions avoided by the world’s media.