This fella seems to have psychological problems, but he doesn’t actually.  He’s travelling right down the middle of the track in the current American right wing stream of politics.  Anger.  Rage.  Determination.  Religious Fervour.  It’s all in the mix, and something entirely alien to phlegmatic irreligious Brits, who feel embarrassed admitting  to each other they have any emotions at all, except through some satirical side view.

The power of this anger in America against the State is
a. growing
b. seen as normal (No one laughed in the audience)
c. will not be backing down

OK have a good laugh, but don’t underestimate the seriousness of this man and millions like him, as the richest nation on earth girds up its loins for a political surge of retribution against the wastefulness and corruption of an earlier era.  The same anger might travel across the pond, and make a British and European version at some point.  Economic depressions have a nasty habit of sending folks a touch extreme, in places like Germany and France, for example.  In Blighty, the stiff upper lip still holds good for the most part when it comes to extremes of emotion, that and resorting to sense of humour…..remember this, for example?

What’s really bugging Americans is their economy.   These charts compare the current recession, which has been curiously declared as over by America’s National Bureau Of Economic Research, with earlier ones – not mentioning 1929 of course.  The growth line is still well into negative territory, and the downturn has run since December 2007.  The recession appears far from its end, and there is as yet no recovery nearly three years on, which explains the emotional outburst coming from the Tea Party candidate at the top. 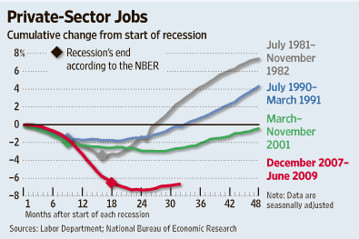 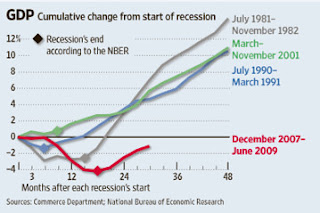 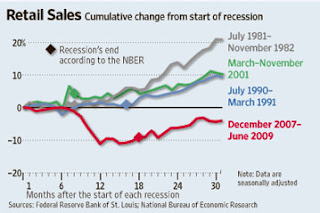