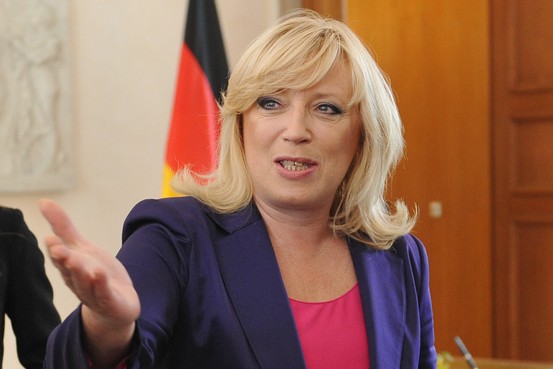 She’s at it again!  Iveta Rad-it’s over, Slovakia’s new Prime Minister is not going to meekly refuse to join the EU bail-outs of Greece and the like.  She’s pumping and she’s angry.  The EU bully-boys tried to smack her down and tell her that she was being un-European by refusing to pay up.  Not prepared to take that kind of talk sitting down, she’s hitting back – and I mean, firing on all cylinders.

The bail-outs are not good for the Euro, she says.  They bring fiscal irresponsibility, and undermine the economy.  The answer is to allow countries to go bankrupt and exit the common currency, not to endlessly bail them out.
She’s right of course.  The debts are too big and there are too many countries lining up to be bailed.  Slovakia is poorer than Greece.  Why should Slovaks pay for Greebos?
Keep it up, Iveta.  It’s time the EU corruption system was taken to task.  If only she’d been in power before the Lisbon Treaty was signed.   We’d be living in a different world now.  But while we have political leaders who tell the truth, we can hope for a better future, and a way out of the slide into obliveun.
The WSJ
BRATISLAVA, Slovakia—The prime minister of Slovakia, the newest member of the euro zone, said overly indebted countries should be forced into bankruptcy, not bailed out, in a sign of the tensions roiling the European currency bloc in the wake of the Greek crisis. 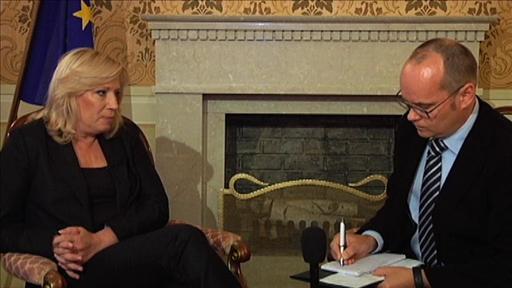 Slovak Prime Minister Iveta Radicova Wednesday called for allowing euro area indebted countries to default rather than throwing them new credit lifelines. Last month, Slovakia refused to be part of a EUR110 billion E.U. bailout for Greece.
Iveta Radicova, who heads the right-leaning coalition government here, also said the so-called stability fund set up this year in case other European countries need financial rescue, is likely to cause more problems than it will solve.
Governments need “a value system based on responsibility” to insure “the further existence of the euro,” Ms. Radicova said in an interview Wednesday with The Wall Street Journal.
Slovakia has refused to contribute to the €110 billion ($139.4 billion) bailout of Greece, the only member of the 16-nation euro zone to do so, and only grudgingly approved the creation of the €750 billion European Financial Stability Facility.
Slovakia’s stance has caused consternation among European Union officials in Brussels, at the European Central Bank and in other European capitals, where a willingness to rescue troubled euro-zone states is viewed as critical to financial stability.
The Tap Blog is a collective of like-minded researchers and writers who’ve joined forces to distribute information and voice opinions avoided by the world’s media.