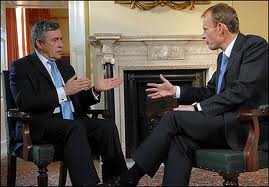 ‘Tell me again, Gordon.  How Big Are Your Debts?’

Why is Blair cosying up to the coalition, and the BBC trying to make friendly noises all on the same day? They fear Cameron and Clegg and their growing power.

Blair is trying to reposition his brand so he can keep playing the big money game with a little ‘unofficial’ help from the powers that be. No sign of sackcloth and ashes there.
BBC staff are so biased, they have no idea they are biased. They live in a blinkered Fabian corridor from which light has been abolished.
They allowed the Blair delusion to persist until 2003, until it meant supporting a war of aggression against Iraq, which appeared unnecessary and wrong. They then put up their first piece of solid resistance to Blair, and he smashed them to pieces, sacking all the top directors and replacing them with patsies, knifing Gilligan and Kelly in the process.
The patsies have appointed further patsies to the point that we are now lectured by a lifelong Marxist every Sunday morning (Andrew Marr), and have no way of hearing that the opposite word to debt is wealth.
Not only are we now vulnerable from ridiculous and rising levels of debt, rivalling Greece. Our only asset is property, a market which looks set to topple any minute, after being bubbled up by soft loans for a generation. There is nothing else.
The Marxists fear a return to private wealth, and will do anything to avoid it from happening in Britain. Yet private wealth is the only antidote to government debt, which seems a fact of life.
Blair does not believe in wealth either, ahem, except for himself and his friends. That’s why the BBC still love him. The masses must be kept in uneducated state-dependent penury, where they fit Marxist dogma nicely, and where they vote for the left who promise them endless cake paid for by foreign loans.
The state will ultimately collapse. That’s what the left wants, for god’s sake. The one thing they could not tolerate is a widening of the middle class, and its further accumulation of wealth. Even bankruptcy of the country would be preferable. The BBC will feel delighted the day it happens. The revolution will have arrived at last.
The Tap Blog is a collective of like-minded researchers and writers who’ve joined forces to distribute information and voice opinions avoided by the world’s media.

One Response to “The Opposite Of Debt Is Wealth”