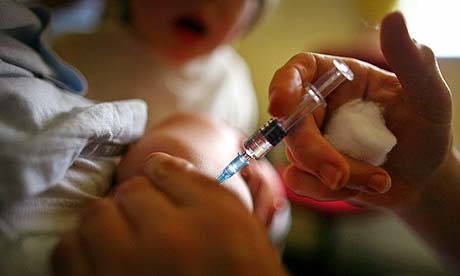 I’ve been back at the hospital this week, and am being checked over again.  My original problem was caused by farming sprays which Dad used on the farm to kill flies when we were kids.  Fifty years later, they have done much to unbalance my nervous system.

On the wall at the hospital there are always some good articles to read, mostly about diet, or diagnosis of illnesses.  One I notes yesterday showed how thousands of parents believe their child was crippled by the controversial MMR vaccine, which the Labour government insisted should be used.  A parent has won a case against the makers of MMR for damages after their child was vegetablised at 18 months, and now thousands of other parents will be bringing follow-up claims.  The hospital was offering a service whereby these vaccines could be delivered one by one for concerned parents, but now the NAZI-run NHS has removed the licence for individually administered delivery, in one of the jabs, making this service impossible.  Does the NHS want the maximum number of crippled babies, one wonders?
Next up, diagnosis.  ME has always been described by doctors as a disease of the mind, which has always been mildly insulting to its sufferers.  The NHS does not want to take responsibility for the condition, as with so many others, is all that that means.  But instead of being honest and admitting that the NKS cannot afford to address conditions such as mine, Lyme Disease or ME, doctors merely usher patients out of their surgeries stating ‘you are depressed’.
Now research carried out at Dundee University using blood tests, shows strong evidence that the condition is caused by a virus.
From Mind –
The crippling condition ME is caused by a virus and is not ‘all in the mind’, scientists claim.
They have found that children with the illness have abnormal white blood cells which suggests they have been fighting off infection.
In the past, patients suffering from ME have struggled to get themselves taken seriously and many doctors believed that their symptoms of constant exhaustion and muscle pain were ‘all in their head.’
But in recent years a growing number of studies have shown that the illness, also known as chronic fatigue syndrome, could be caused by a virus.
Now scientists have found that children suffering from the condition all have the same abnormalities in their blood, which could indicate their body is fighting off an infection.
The study, carried out at the University of Dundee, Scotland, took blood samples from  50 youngsters aged between 7 and 14, half of whom had ME.
They found that the blood of those with the illness contained higher proportions of free radicals – harmful molecules that can damage cells, tissues and organs.
Their report, published in the Archives of Paediatrics and Adolescent Medicine, also showed that children with ME had large numbers of white blood cells at the end of their lifecycle.
The high turnover of these cells could suggest that the body is fighting off a virus or infection.
ME affects around 150,000 people in the UK including 15,000 children, some as young as five.
They often experience flu-like symptoms and feel constantly exhausted with headaches, a sore throat and muscle pain.
The condition can last for years and on some days people feel so awful they can’t get out of bed.
Professor Jill Belch, an expert in vascular medicine at Ninewells hospital in Dundee who led the project, said: ‘What we’ve found are blood changes that suggest chronic inflammation.
‘This is important because it’s showing an abnormality that we might be able to devise a treatment for, but it’s also important because some people do suggest that ME is a disease of the mind and here we are showing that it is a disease of the body.’
Dr Neil Abbot, of ME Research UK, which co-funded the study, said it was ‘fascinating to discover evidence of a persistent or reactivating viral infection’.

‘Although the cause of ME is unknown, more than half of all patients say their illness started with an infection,’ he said.
‘The study undoubtedly adds greater scientific weight to the existence of a condition which, sadly, many still fail to acknowledge in spite of its severity.’
In recent years scientists have claimed that ME is caused by a virus, raising hopes that a treatment could one day be developed to cure patients of their symptoms.
But other researchers have disputed their findings saying their is ‘no proof’ for this link.
The NHS obviously has limited resources.  But its ability to lie about the conditions it cannot treat, and its folly in removing vaccine licences to prevent people trying to protect their babies from nervous destruction, seem limitless.  How can anyone have respect for a health service which so clearly doesn’t care.  Until the NHS is honest about its limitations and tolerant of people who want to offer an improved service, and people who want or need to buy those services, it is in my view acting unethically.  All the NHS needs to do is to tell the truth – that it is not a comprehensive all-knowing health service.  It has financial as well as capability limitations.  Patients should be told the simple truth, so they can make the right decisions for themselves and their babies.


http://www.wddty.com/mmr-vaccine-isn-t-safe-after-all-uk-government-forced-to-concede.html
The Tap Blog is a collective of like-minded researchers and writers who’ve joined forces to distribute information and voice opinions avoided by the world’s media.