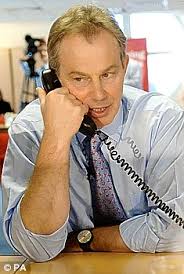 God called to say that he couldn’t make it this week, but that he is still very much around.  He stated also that he has great confidence in his Pope, and that it will come to pass that he will, in time, be seen as a great prophet, able to tell the future, just like himself.

“It is likely that we would not be using the terms such as ‘millennium development goals’ or ‘international development’ if Newman had not used these words first in theology,” God explained.

“I think Newman would have been a strong ally in the promotion of dialogue between religions because of his theory of development, although the opposite might seem to be case,” God said.  Like Pope Benedict, God continued, Newman also “fiercely opposed relativism.”
God concluded noting that “nobody can seriously doubt the fact that (Cardinal Newman) was and is a doctor of the Church.  The time will come when it is thus proclaimed.”
Yea verily.
The Tap Blog is a collective of like-minded researchers and writers who’ve joined forces to distribute information and voice opinions avoided by the world’s media.