The key word is wealth.

To Vince Cable, it is a dirty word. So dirty that he wishes to legislate it out of existence with taxes.

That however sends our society’s money to the most irresponsible money-handler of them all, government.

Wealth is the counterpoint to debt. If we have wealthy citizens this is not a bad thing. It is a good thing. It gives the economy bigger lungs. Debt is the belt tightening across our stomachs. Wealth buys time, and in private hands can be put to responsible effects. Those who cannot handle wealth responsibly, lose it. Wealth is the result of long term planning and responsibility-taking, and also the cause. Without wealth we are all debtors. Markets are less stable. Investment is harder.

That’s what must be rammed down Cable’s throat and into his tiny little brain. Wealth is the solution, not the problem.  It’s much fairer if we are all broke.  I would agree.  But why not have a few positive things to look forward to, a way to build the future out of the mess we are in now?

Britons need to drop their anti-wealth notions, unless they love poverty more, of course.  Everyone gains from the greater stability that more private wealth would offer us.   As in Japan, where private wealth and savings act as a counterbalance to the largest public debt in the G20.  Private wealth makes the country’s debt the most bankable and cheapest there is.  If Britain got rid of her outdated socialist notions, we too could enjoy higher status amongst the word’s bankers, and our own banks would not be so exposed to an economy, held up on a vibrating cushion of insecure debt.

Cable’s message is to reassure people that feelings of jealousy against the wealthy are healthy.  They are not healthy, either for the victim, or for the perpetrator.

Jealousy is entirely negative.  It is based on the assumption that success can never apply to the green-eyed self.   Success comes first from belief, a feeling of contentment, constructed out of hope.  Only those with no hope need to feel jealousy at the success of others.  This is the deficit that matters – making people believe that they can do it, not assuring them that no matter how hard they try, don’t worry,  the government will always come along and wreck their good work.  Political leadership in recessions has to do better than that.  Cable should be driving people on to believe in themselves, to build the future, and not waste time carping about the unevenness of the process of economic growth.

He is after all an accountant.  That’s how they tend to think, as they walk pedantically into the future facing backwards, looking painfully at the past. 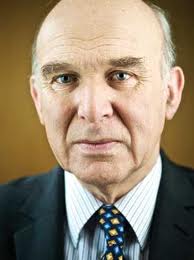 No wonder he always looks so bloody miserable.  Come on, Mr Cable.  Get a life.