Monica Mint charges her clients one Rooney  GBP1200.  Is this the only enterprise Britain is capable of?

That’s right.  We hate ourselves.  We have become craven, dependent beings, dependent on Big Brother, on the media for our opinions, on governments for handouts, on banks for loans and on subsidies and permissions to do everything and anything else.

There is another way, a way that hasn’t been tried or spoken of for two generations.  People could fight to become wealthy in their own right, to stand proud with their own independent viewpoint,  not just to own houses, but to buy shareholdings in good companies at the right time in the market, and build their own businesses , not just to sell them after ten or twenty years for a fat check, but to dig in and own businesses through generations in one family.  To create a strong private sector which stands apart from the corruption and pathetic, mind crippling arrogance of the Client State.

If the same workforce can stay employed by the same family over generations, with no sellout to giant corporations ever planned for,  if people had enough money to fund their own ventures rather than crawling to the sharks on Dragon’s Den, who only want to get their money out with a fat return, then, and only then might people start to be able to look each other in the eye and see ourselves and each other as anything more than pathetic socially engineered Blair admiring creeps.

For that is all we are, whingeing about bank charges, government debts, bankers’debts, government cuts and ending of useless state programmes.

All we need is a tax system which permits the determined to build their own strength and independence outside the control of the state.  People will dedicate their lives to fight for indepenence and the right to stand apart from the slovenly mess than our society has become.  Government has taken too much, most of our cash, and our patience as they unfurl lunatic regulatory programmes designed to cripple our entrepreneurial spirit.  What do we have to show for it?  Peace and calm on our streets?  No.  We have thugs and yobs steeling anything that’s not nailed down from every house in the land, confident they will never be troubled by the police or the courts.

Do we have brilliantly educated kids?  No we have  a generation that can no more think than it can spell or do arithmetic.  Our hospitals kill as many as they save.  We have the greatest mess and disappointment possible to imagine, yet still, with the media controlled by Marxist activists, like Andrew Marr, and so on, everyday we have to listen to more of the same socialist dogma that wrecked our society in the first place.

People don’t believe in success.  They don’t believe in wealth.  They prefer state handouts, debts and failure writ large in every institution in the land.  They just want their fair share of the dwindling bundle of notes to feed their incapable selves and children.

More socialism will not repair the damage done by the dogmas that hate eneterprise and independence.  Only an aggressive anger as with The Tea Party in America will seize back peoples’right to be successful, to have their own money and not see it surrendered to the uncaring irresponsible state.  The power of the unions was broken by Thatcher.  Next must the power of the media be broken in similar vein.  People must be told that the alternative to debt sinking the country into oblivion is not merely less debt as is the only talk in the media, but the far more positive aspiration  Wealth.  Success.  Pride.  Confidence.  Enterprise.  Activity.  Determination.  Willpower.  This is what will build a better world, not just 10 per cent added to Capital Gains Tax so people who haven’t made any gains can feel less miffed, and government sponges can soak up a little more free gravy. 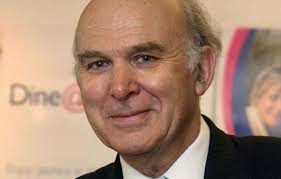 The State has failed, not capitalism.  It is the State that must be broken.  Cameron and Clegg understand the urgency of this task.  Vince Cable the accountant does not.  He wants to adjust some figures in some accounts somewhere and by fiddling the figures a little, he hopes to achieve a totally different outcome.  He won’t.  He needs to think back to first principles.  What is a human society all about?  If the aim is collective failure, then let’s have as much as we can get.  Blair and Brown have shown the way.  Let Cable finish the job.  We don’t need accountants any more than bankers at this point.

We need belief, a new set of values to hang our efforts and actions upon, something which tears up the postwar consensus and allows a new age of prosperity to surge where the world’s bankers would love to lend to us, if only we would allow them to, but we don’t need them thank you very much.  Now come on Cable.  Start using your imagination for once.  No more tinkering.  Private wealth built on the pride of industry, where the taxman keeps out of it, where jobs flow, investment and hope.  That is what we must have.  Give us that as that is all we will accept.  We’ve had a bellyful of this other rubbish.

NOTE that in Europe Italy has the highest level of private savings, and not uncoincidentally, her IHT is zero.  Is that why her government’s debts don’t worry investors as much as those of Greece, Spain and Portugal?   Private wealth provides stability against corrupt and wasteful government, of which Italy has one of the worst.  Japan too can carry huge government borrowing because she has allowed private people to become wealthy.  IHT there is complex but no more than 20 per cent.

Only and exclusively in Britain, it seems, is wealth thought of a Vince Cable dirty word.  Our IHT is the highest bar none in the world, and it commences at one of the lowest levels.  Our self loathing will continue until financial success is considered something other than something to be ashamed of, like bad breath, or a socially embarrassing condition, which the taxman can help you with by removing it for you.

Sod the taxman.  Wealth can take a lifetime or many lifetimes to accumulate, and the effect of taxing it highly is to prevent people from bothering.  Private wealth works.  Capitalism works.  They make society and the economy stronger.  Government dependency, on the other hand, creates growing incompetence and incontinence.  If we don’t turn it round, the backlash after another ten years of socialist social disintegration will be truly frightening.

The Tea Party will be crossing over soon enough.  Vince Cable’s warbling is socialism’s swansong.  If he keeps going, someone will have to choke this misguided accountant, while the debts created by his fine political beliefs drown his intended beneficiaries and destroy the last vestiges of our civilisation.

The next stop after David Cameron will be something far more brutal.   It’s time Britain decided that financial success was not only allowable but something to be encouraged for as many people as possible.  It used to be in our great days  and was not just something for young footballers and other celebrities to lavish on their charmless whores.  We need to get the money back from government where it is being wasted, and allow it to grow once more in private hands.  Yes Mr Cable, we want people who accept the longterm responsibility of wealth, and make as many wealthy people as we can..  That will create the new era of prosperity, and drive us forwards towards a better world.  It ensures that however irresponsibly governments behave, the country will have enough reserves to keep going.  We won’t fall for the idea that governments can do it all for us again, or even any of it.  So let’s tell them and keep telling them.  Give us our money back and  get out of our way.