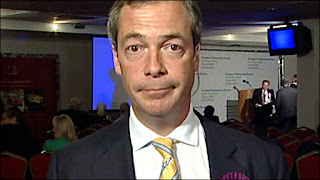 John Redwood’s statistical explanation on why Conservative euroscepticism is not in the ascendant in Parliament should be read by every UKIP voter.  In simple terms, the only non-europhile party in Parliament, the Conservatives, have only 306 seats when 320 would be needed for a majority.

UKIP standing at the last general election, achieved precisely nothing, other, that is, than making a coalition inevitable.  Luckily, by a miracle that coalition is not one between labour and Lib Dem, as the two parties combined were short of a majority, but only by a whisker.

There are just 306 Conservatives. The party fought the election on getting powers back from the EU and saying No to new transfers of power. There are 258 Labour and 57 Lib Dems, giving them a pro EU total of 315. There are also Nationalists who favour more EU power who could give the pro EU forces the majority.

If UKIP had supported the Conservatives, a move unthinkable to the fanatical mind closure that UKIP demands of its converts, there would now be no coalition.  There would be a Conservative government.  The eurosceptic wing of the party would be able to negotiate from strength, and the Party would be bound by its election promise to hold a referendum on transfer of powers and loss of sovereignty.

As it is, as Redwood points out, the europhiles hold a clear majority in Parliament, and pushing through a referendum on transfer of powers would not work.

If ever an organisation existed to destroy its own beliefs from being achieved, UKIP must be it.  Is there a phrase for such a political party.  A Ratner Party or something?  A Malcolm or a Pearson?

It must be the best decision for UKIP to withdraw from general elections in future, and fight within the Conservative Party.  It’s time to stop fantasising from the fringe, and get into the game on the right side for god’s sake.  Brussels bureaucrats must be chuckling away to themselves at the stupidity of UKIP.

Maybe this will knock some sense into them –

A blast of violent space weather is due to hit the Earth today following a massive explosion on the Sun.

It is likely to spark spectacular displays of the northern lights.


Scientists witnessed a huge flare above a giant sunspot the size of our planet, linked to an even larger eruption across the surface of the Sun.


Experts estimate the wave of supercharged gas will reach us today when it will buffet the natural magnetic shield protecting Earth.

16 Responses to “The Stupidity Of UKIP”